After the first two shows in Tokyo I spent two days wandering around Koenji, Mitaka, Nakano, Shibuya, and Shimokitazawa and generally taking it easy before the cornerstone of my trip: a weekend of three consecutive live shows by artists I was looking forward to more than anyone else. By this time in the trip I had been in Japan for nearly a week and the effects of living in a tropical paradise all year long was taking its toll. The night before I started to get the warning signs of an incoming cold and the morning I set out to Nagoya to begin the most exciting few days in my itinerary I felt pretty terrible, although it wasn't anything that seeing Oomori Seiko, my biggest musical crush for the past year or so, couldn't temporarily remedy. 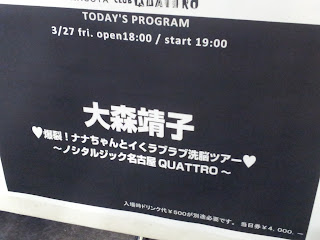 For her Spring 2015 tour, Seiko would be returning to the small cafes that she perhaps frequented as a young artist plus a few extra gigs performing with a band of veteran musicians in larger live houses. The acoustic solo shows all sold out immediately - the intimate venues obviously meant extremely small capacity - but one of her band shows at Nagoya Club Quattro wasn't sold out at the time I was planning my trip and a friend was able to get a ticket. At the time I never really thought about the pros and cons of seeing her perform on a bigger stage with a backup band versus seeing her perform intimately with just her acoustic guitar (and Nana, her teddy bear, of course). And of course it didn't matter too much to me because I was just glad that she was actually performing while I was in Japan. It would've been nice to see Seiko in a cozy little venue for an acoustic set, being closer to the young woman herself in a small crowd, hearing some songs that she perhaps wouldn't otherwise perform with a band, and being able to witness the antics of her solo shows that I've always seen videos of: Seiko plucking and pulling the strings nonsensically and later laying waste to her guitar. But at the same time the fuller, more dynamic sound of a band set was equally enticing and perhaps even more fitting for some songs that were recorded with other musicians in the first place and the lack of intimacy was replaced with the rush of being in a crowd with a ton of other energetic fans. They were both great ways to enjoy Seiko and her music, two sides of the same coin. I'm not sure if I have a preference. 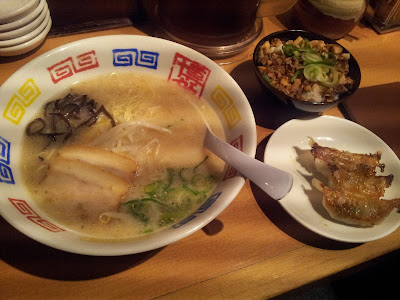 On the train ride from Tokyo to Nagoya I found out about a Ramen Street in Nagoya station where I stopped for lunch. The best part about being sick is it gives me an excuse to ingest as much Ramen as possible without feeling guilty (not that I feel guilty even if I'm not sick). By this time my cold came full throttle and this made the search for my hotel extra frustrating. I wandered around for an hour or two in circles and finally found it but realized I was a there an hour or two before the earliest check in time. The staff was clearly irritated but let me in anyways. It was still early, but after not being able to find the hotel I decided to head to the show for fear of getting lost again.

Club Quattro is at the top floor of Nagoya's Parco building and just a few trains tops away from Nagoya station. The gig hadn't opened yet, but a few people were trickling in to check out the venue. Most of the limited tour goods had sold out (merch went on sale quite a while before I got there) and the rest of the T-Shirts and such didn't catch my eye. I spent some time wandering around the other floors of the building before I had to line up along the long winding staircase leading up to the club, each flight of stairs marked with the signs for ticket numbers. I was 399. 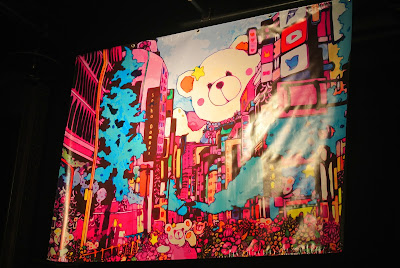 The crowd immediately rushed to get as close to the stage as possible when Oomori Seiko came on, starting out with the singles "Zettai Zetsubou Zekkouchou" and "Kyuru Kyuru" from her latest album. Unfortunately, everything toned down after this even if Seiko was going into some of my favorite songs like "Endless Dance" and "Kimi to Eiga." I couldn't understand why the entire crowd went completely silent and motionless except for myself and another guy closer to the stage swinging and bobbing our heads with the music - this same guy was also swigging his whiskey flask pretty frequently before the show started, so I knew he had the right idea. The band took a break a few songs later and her staff came up to show off the merchandise for sale outside before the band came back for the latter half of the set. The crowd finally came back to life for one song in the latter half: "Midnight Seijun Isei Kouyuu," perhaps her best known, and died out again as Seiko winded down the set. She played an encore of a few extra songs and her second encore was done a cappella, Seiko came on stage alone and screamed her song "Sayonara" at the top of her lungs. You can check out the whole set list on this site, which chronicles Seiko singing just about every song I wanted her to sing. Usually bands seem to make it a point to avoid playing the songs I like the most and it's happened on almost every occasion so it's a pretty big deal when Seiko sang not just "Endless Dance," but also every other song of hers I was obsessed with at the time. Every single one.

The band lineup that night consisted of members of groups like H Mountains and Soul Flower Union (I was a bit disappointed since Pierre Nakano of Rin toshite Shigure was her backup drummer for all the other band shows except this one), and although the troupe had less of the stage antics and energy as The Pink Tokarev who Seiko had recently been touring with, they did a fantastic job of coming together to render Seiko's music in live form; even her more electronic numbers like "Imitation Girl" and "Zettai Shoujo" sounded great with the accompaniment. Seiko made every effort to get as close to the fans as possible and often reached out to grab all of the outreached hands pressing toward her in the crowd (mine included at one point!!!), something I thought would have evaporated when she graduated to a major label.

Besides the audience being stiff for most of the show, my other pet peeve was that a lot of younger looking fans had been really annoying. They pushed everyone out of the way to make it to the front of the crowd while everyone else reluctantly made way for them, but most people stayed cemented in their spots. What was most grating was the snide grin on their faces as they laughed it all off and tried even harder to push everyone out of the way. Maybe I was just in a bad mood from being sick, possibly hungry, and having to walk for a while to find my hotel but it was definitely one of the only times I've ever felt irritated this much at a gig, and at an Oomori Seiko one to boot.

Annoyances aside the whole performance was fantastic and most of all I was thankfully that I had been so close to the front. Club Quattro also wasn't nearly as large as a live house as I thought it would be, especially considering that some noteworthy bands play here from time to time. Even if you can't get in early and claim a spot on the floor, the raised area in the back of the live house will still give you a nice view of the stage from wherever you are. 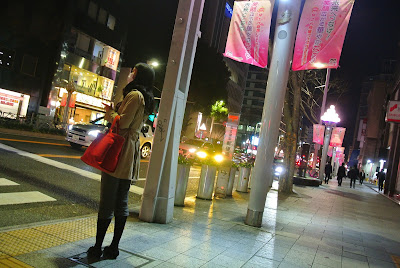 Once the show let out, I made it a point to walk around Nagoya for the rest of the night. The last time I was here I had been pretty far from the city and barely made it a point to explore or research what it was known for. This time I strolled around downtown Sakae, near my hotel, wandered into the lively night life and red-light district, and finally ate some miso-katsu. And of course I knew exactly how to get back to my hotel by then. The cold was still bothering me but the next day I had an even more exciting gig to go to. I can't remember when I got to sleep, but I enjoyed the view of the city from my corner hotel room while stocking up on as much Vitamin C as possible.
-
Chris