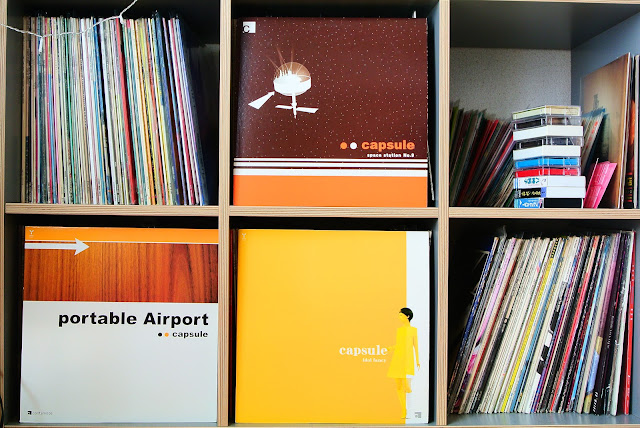 I noticed that this week I happened to pick up music belonging to groups with a single, female vocalist and a male producer, namely Capsule and dip in the pool. I don't really want to argue for an integrated connection between them besides this basic observation on their personnel--my purchases were not intentional, seemingly unconsciously, and happened by chance--but they nevertheless make really cool music, which is fundamentally why I picked these up ini the first place.
The first is the now well known project of Yasutaka Nakata of Perfume and Kyary Pamyu-Pamyu fame, Capsule. I was first introduced to Nakata's post-Shibuya-kei sound via Capsule's albums during his early days on his own self produced label Contemode that gave rise to a number of other interesting projects he produced, my other favorite being the short lived Coltemonhika. I've always had a soft spot for Nakata's early work with Capsule that was electro-pop, bossa-nova, and a bunch of other genres cleverly fused together to serve as the perfect soundtrack to boutique shopping in Tokyo before he gravitated to the more electronic based club music he is now associated with. A few 12" records came out to accompany Capsule's early albums but I was never the biggest capsule fan back in the day and neither was I in possession of a record player. A few years ago I purchased portable Airport at Disk Union in Ikebukuro but haven't seen another record from this period of capsule since; I did, however, get the 12" for their more recent club track Musixxx/I'm Feeling You. The other day someone seemed to have traded in a bunch of the early releases to Banana Records' main store in Sakae, so I picked up the two I didn't have and could actually afford: Idol Fancy and Space Station no.9 (Cutie Cinema Pre-Play's 12" was just way too expensive). The latter is a collection of four tracks from the album of the same name, which is a bulk of the short LP anyway, and the tracks on Idol Fancy can be found on Phony Phonic save for the extended remix of Weekend in My Room on its B-side. Even if early Capsule isn't everyone's cup of tea, I for one really appreciate the album art as well for its minimalist design that was also a product of the previous generation of Shibuya-kei artist and their love for European easy listening records and design. They look really cool on the shelf. 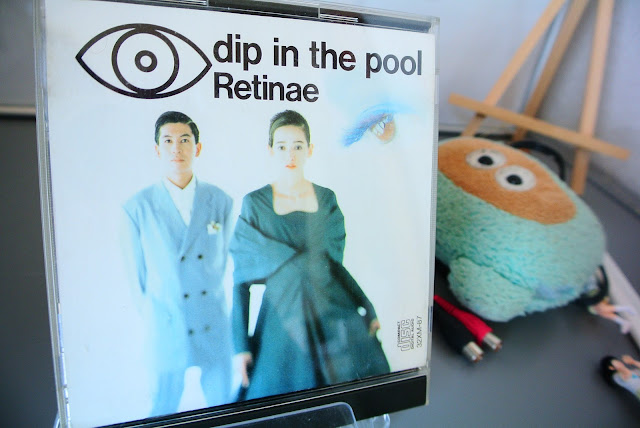 A few weeks ago in Okinawa I picked up a CD by dip in the pool, a sparse, melancholy electro pop group from the 80s with the same sort of member roster as capsule. A smartly dressed male/female duo, the group was recently brought to my attention because a foreign label released a 7" of one of their older songs, "On Retinae." It's quite good, and definitely part of the YouTube fueled mining of 80's gems from Japan. The CD is a pretty lengthy collection of their songs and some bonus tracks and B-sides. 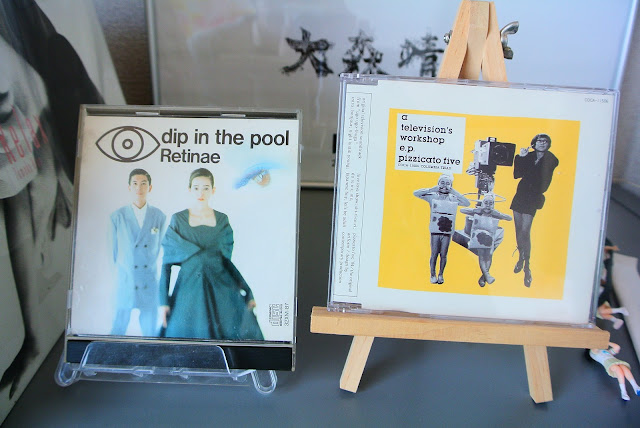 Even before these two releases, I found on my shelf the pickings from a previous record store excursion: a 100yen copy of a Pizzicato Five a television's workshop e.p. You can probably guess that Pizzicatto Five is also a male/female, producer/vocalist combination, and one that has more connection to Capsule than dip in the pool. I think Capsule was widely regarded as the sort of second coming of Pizzicato Five and its quite evident in both the sounds and aesthetics of their early releases. PF are, however, one of those bands I don't really know about despite them being really important, so I'm sure leaving them out of this blurb is fine: sources are probably everywhere about them and they even officially released a bunch of their music here in the US and abroad--my sister knew about them when their song was featured in an episode of Futurama, and she also bought me one of their albums when she saw it at a used CD shop back in Guam.

I'm sure a ton of other memorable and more popular duos are out there--not many come to mind, however, and not many compare to how cool both dip in the pool and Capsule look on the covers of their albums. It's quite brazen how both members of dip in the pool appear on their cover but, while not completely invisible, Nakata was usually not as prominently featured on capsule releases until a little later. He barely makes an appearance on these records I have but then again the packaging is pretty sparse to begin with...
-
Chris
Posted by Chris at 11:55 PM