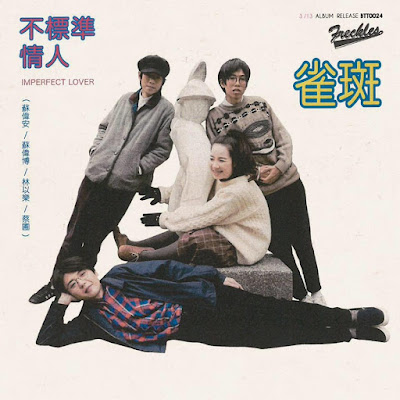 Last summer I jumped over a number of language hurdles to get my hands on 不標準情人 Imperfect lover, an album by a band called 雀斑樂團 Freckles who hail from Taiwan.


Japan had just reached the peak of its treacherously hot and humid summer months and the neon colors of the minimalist, 80s-esque cover art seemed to fit perfectly. The album arrived promptly at my dormitory but it seemed to fly over my head at the time; maybe there was a lot going on for me both personally and musically. Nothing really left a lasting impression on me with the exception of the title track that led me to the band in the first place.


This groovy little track never left me and trust me, I didn't want it to. I couldn't get over how soulful it was, so light and fun, and that infectious little chorus was so catchy I caught myself singing along a couple of times. Sure, they were shuffled into the dreaded city-pop genre of stuff but I couldn't help but feel like that was a little too convenient, too simple a denomination, and just a way to lazily group them into the collective of bands they had shared the bill during gigs in Japan. In the coming months I had no choice but to return to the album whenever I wanted to get my fix of "Imperfect Lover" and that I did, quite often. In between endless loops of the single were the occasional breaths of fresh air I dedicated to ingesting the rest of the album and gradually it came to mean a lot more to me than a single song. It always happens like this, I know.


I came to the realization that I could never remain sad after listening to Freckles. When I took long walks by the river or wandered through residential streets I had never seen before, they were blasting through my little headphones and washing out any negativity welling up inside me. There's something about vocalist  voice, something sweet, sincere, and endearing, that serenaded me but also gave me some hope in a lot of tough times. The band didn't have that pretentious air to them that some of this music does (citypop, hi). It was fun and this genuine love for their craft resonated with me, but it's not like it's hard to hear. Listen to this beautiful track that comes at the end of the album, one of the finer ones that offsets the uplifting happy melodies I linked above.


Of course, this makes it seems like the band reinvented music with this album but I admit that they're far from perfection. The gorgeous melodies and the laid back vibe sometimes make the tracks drag a bit and not all the songs make me want to dance. Rather, the album has evolved into something personal for me. No longer just a record, a unique little time capsule of emotions that have been floating around in my head the past few months. Perhaps this is why I shouldn't recommend it to anyone: clearly, I have a bias. But maybe someone else will let their infectious little numbers grow on them, too. Go ahead, let some magic happen.