I can clearly remember putting on headphones at the listening booth in the indie section of Tower Records Shinjuku, pressing play next to the first disc because in between all the scribbled Japanese characters was SUPERCHUNK, a band that I had just listened to--and liked--a few days before. The opening guitar riff of a song called unlucky by a band with a pretty unforgettable name: my ex.


There's just something about that moment when the opening chords dissolve and the entire band comes in that I can't describe. Such impact, such emotion...maybe it was just a pretty sad part of my life that made me so vulnerable to something so emo, but from that moment I felt like I had dived in head first and the song had engulfed me. Naturally, I walked out of the store with their homework EP in hand and listened to it like crazy for the next few months, but my ex(the band, just to be clear) just kind of faded from my memory after that. I didn't know what they were up to and they never really made a big splash despite the EP being on constant repeat during my commutes. Then again, such is the state of a lot of smaller bands in Japan no matter how great they are. Life gets in the way and they fade off the planet.

But here I was in 2018, years after I first put on those tattered headphones to listen to this completely unknown band, getting in line to finally see their show. And not just any show, it was with another three bands that included the excellent Typhoon Club and was hosted at my favorite venue K.D. Japon. 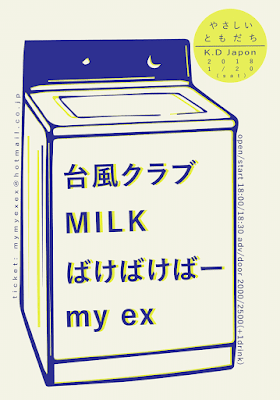 The event was sold out, packed wall to wall with bodies, and since the bands set up on the floor in front of the audience there was barely any room to see. K.D. Japon serves up some really great curry at the bar that I was looking forward to, but it was pretty obvious that I wasn't going to get a plate anytime soon.

The first band was a mystery to me but with a name like bake-bake-baa it's pretty easy to tell that they played some quirky guitar rock that jumped around to all kinds of strange, noisy, and angular territories. I got quite a kick out of the female bassist who was always shredding her parts with a twisted smile half hidden under her hair that was already eating into her face. 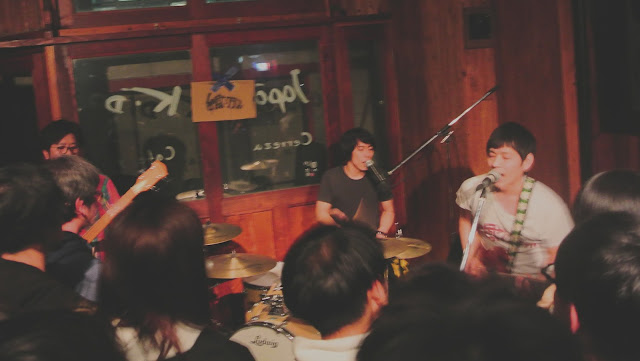 Besides my ex, I was familiar with a pretty cool band who didn't come to Nagoya so often called Typhoon Club. I saw them last year in Okayama with Kaneko Ayano and they've been picking up some speed and fame since then, releasing an album not so long ago that I truthfully haven't heard yet. Still, I love their brand of music: a mix of folk, rock, and punk that's a welcome breath of fresh air from all the other stuff I tend to listen to.

It was anyone's guess what a band called MILK would sound like--I obviously didn't even make an effort to try and look up the band. When they finally got done soundchecking they rolled out fast, mean, hardcore punk that hit you right in the face and didn't really fit the rest of the bands on the bill nor the ambiance of the live house. Still, their energy was great, infectious, and woke me up quite a bit. Unfortunately they were a little too energetic and I didn't get any photos because of all the chaos. 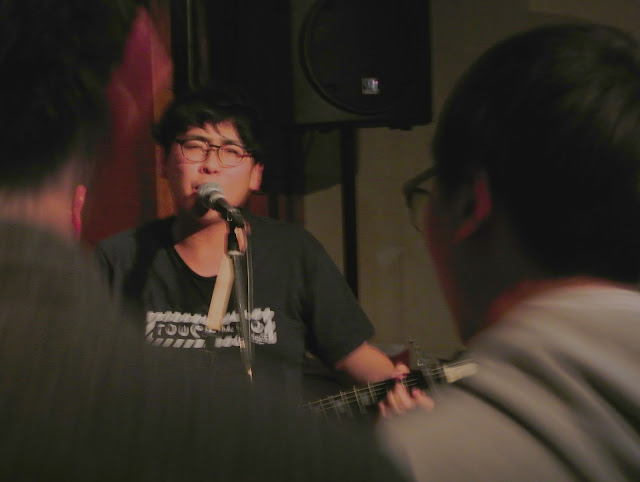 my ex were the hosts of the event so they played last to the full house at K.D. Japon. The singer seemed kind of down and the crowd wasn't too responsive to his downer MCs(save for one enthusiastic and probably really drunk patron), but their music was great as usual. Emo, sure. Getting to finally hear unlucky after all these years was pretty phenomenal, and I hope that more than a few people that night came out as in awe of the band as I was that day I stood in Tower Records listening to their EP.
-
Chris
Posted by Chris at 8:08 AM