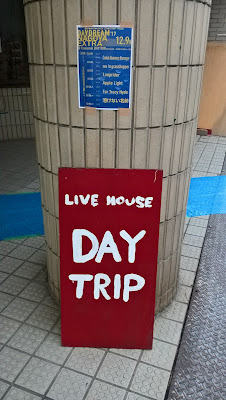 Japanese bands love their shoegaze and dream pop, and the genre has been worked into the sound of numerous indie bands over the last decades, even spawning Japan their own series of expertly assembled tribute albums to My Bloody Valentine.
Fans overseas making the trek to Japan to dive into the sea of loud and distorted guitars, however, should remember that the genre is still a rather niche one and shows with all your favorite bands won't happen to often. High in Tokyo's Koenji neighborhood has been heralded as the live house paying host to the most shoegaze shows featuring the most exciting bands coming out of Japan, but that's if you happen to stop by on a night hosting these kinds of bands. For people in Japan but outside of Tokyo like me, it's even more of a drag because all the most well known bands, even from outside the capital, usually play shows in Tokyo. Thankfully for me the Daydream'17 event brought about by Kyoto shoegazer came early this year with a fantastic lineup of the best bands active in the scene today, a dream come true for shoegaze fans in Nagoya.

Right across the street from a venue I talk about too much, K.D. Japon, is Day Trip, a cozy basement venue that might have been chosen for its name's synergy with the event title more than anything else. Jokes aside, Day Trip was an excellent little venue that felt intimate, cool, just a little bit scuzzy, and with none of the deadpan glam of a corporate live house. The stage was close even if you were hugging the walls or retreated to the back of the room, which is ideal for the kind of music on the bill for tonight.


Daydream's lineup featured a few bands I already knew. I purchased For Tracy Hyde's album last year and have fond memories of Tokenai Namae's early demo work...but many of the bands I had never heard before, like Call and Response's much talked about Looprider. There were also a bunch of bands that were totally new to me, but most importantly I had never seen any of these bands live before. A balanced roster like this is just what I like about a gig, the potential to discover something new and the anticipation for something already well loved. 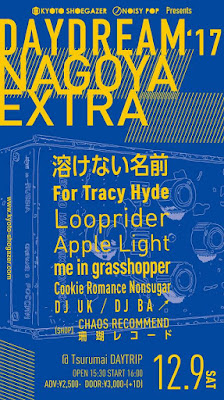 Perhaps the only problem was that the show had a massive roster and was forced to start earlier than most gigs, not such a problem for it being on a weekend but a major discrepancy for a night owl like myself who makes up in the P.M. Perhaps it comes as no surprise that I missed the opening act, Cookie Romance Nonsugar, who I was told sound just as adorable as their name. 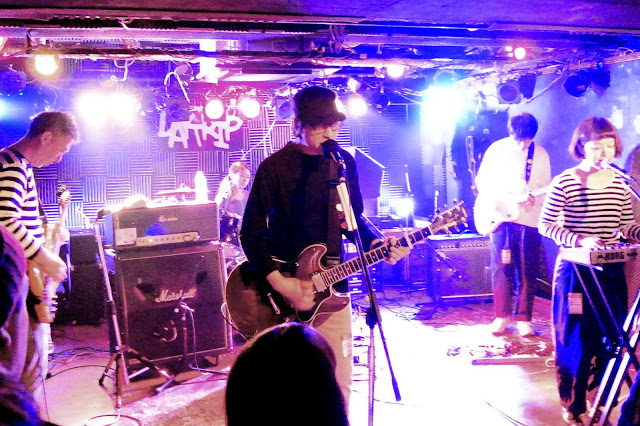 me in grasshopper was the first act I saw on the bill, a band whose name came up frequently on fliers I saw for gigs in Nagoya but none that piqued my interest enough to actually attend (Yuck's Japan tour, to be specific). They leaned more to the indie pop genre of things with just a little bit of dream pop and shoegaze mixed in. Very pleasant, easy going stuff and nothing too arresting, angular, or overly droning. 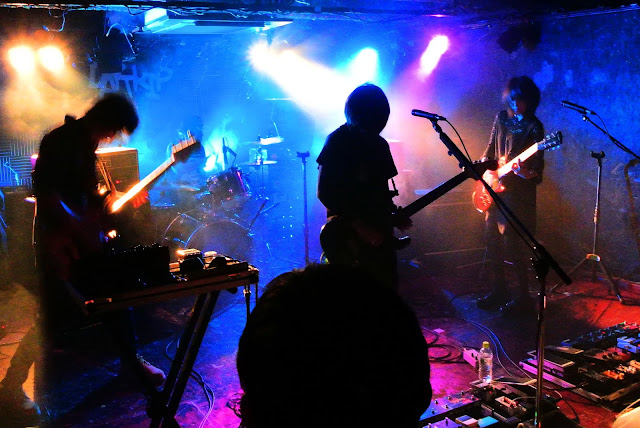 But the latter set of adjectives would probably work for the next band, Looprider, who shook up the audience after they delivered their setlist. Being the loudest and heaviest band on the roster, they were a mix of a variety of genres, choosing the loud, noisy guitars of shoegaze as a more prominent influence than the breezy, easygoing dreampop side that most of the bands on the night's roster would pull from. Their albums are on the excellent Call and Response label which is enough reason to check them out, and their latest is a kind of concept album with just one long track. They also yielded my favorite photo of the night, which I used as the header to this article. 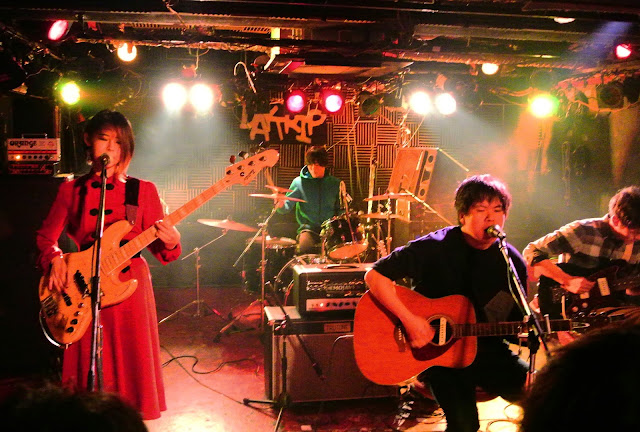 Apple Light toned things down a bit with their set, erring on the softer side of the indie pop spectrum. Out of all the bands they felt the least experienced and youngest, lacking the impact and distortion that a lot of the other acts that night brought to the table, but nonetheless enjoyable. 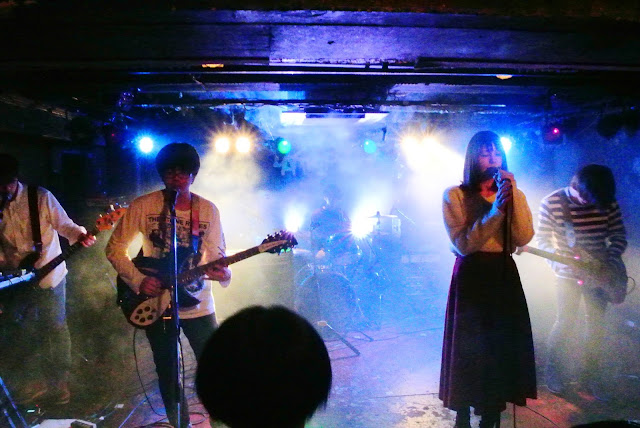 The only artist of the night that I had given a thorough listen to was For Tracy Hyde, one of the last band's to take the stage. They just released their second album and played a lot of songs from that, so I was treated to a lot of new material I had not heard before. Their music has been described as a mix of anime-pop, indie pop, and shoegaze, and I think that works quite well. It's accessible, their vocalist is cute, but their sound still gets distorted and fuzzy so it doesn't sound as polished and lifeless as one might think. 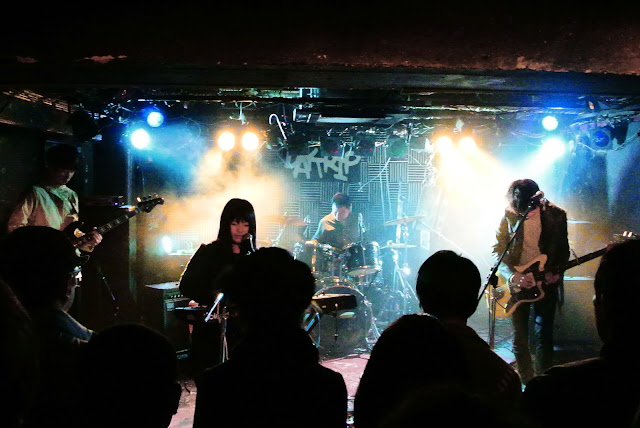 There was a shy, quiet guy who had staked a spot at the front of the stage for nearly the entire show and when the last band of the night, tokenai namae, started setting up, I noticed him crawl silently on stage as their guitarist. They hadn't performed in some time--they never do with much frequency--and the vocalist quivered as she delivered the MCs. They all seemed a little tense, at least to me, and noted they were quite nervous, but none of this meant that they played poorly. On the contrary, I felt there was no question that the organizers had saved the best for last. There was something about that fuzzy droning guitars, sweet synths, the dual male/female vocals, and the onslaught of a really solid rhythm section that made the band stand out from all the others that night. Their rhythm section in particular had some really powerful drumming and crunchy bass lines, something not everyone would think would typify a group going for a shoegaze/dreampop sound, but tokenai namae proved that there is a lot more than a fancy guitar and a myriad of effects that gives a band in these genres some footing. As I left the gig, just about everyone was talking about how blown away they were by the band, and with good reason: they did everything right and felt like the best band of the night. They don't gig often but I hope the warm response from the crowd persuades them to get back into the rhythm. 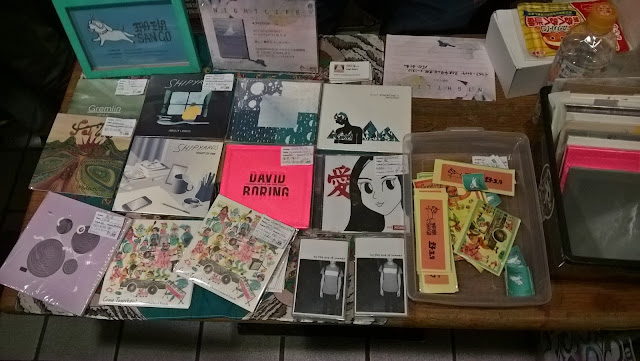 Before leaving the show, I paid a visit to the merch table to pick up one of tokenai namae's albums and stumbled upon a colorful array of album covers from distributor Sango Records set up at the exit. Run by the frontman of the most talked about indie band from China, Chinese Football, the label has a mix of releases from all sorts of genres(shoegaze, emo, alternative) and has bands from China and some from Japan on board. I picked up the compilation of Chinese Football and Friends, featuring a ton of really great bands from China. Also, their mascot is a snorkeling dog. Cool. Check out their stuff on their official site, linked above or on their bandcamp.