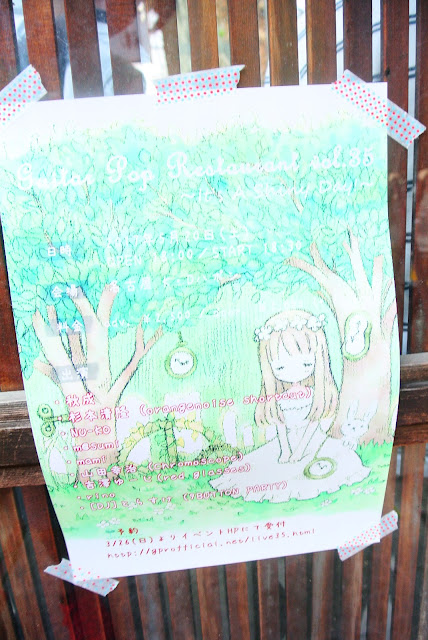 The Shibuya-kei sound, enshrined by leading groups like Flipper's Guitar and Pizzicato Five, hasn't quite been making as much noise in recent years. Once the second wave of artists sprang up, spearheaded by the now renowned producer

Yasutaka Nakata and his group capsule(plus soon to be super stars Perfume), things looked like they were making a second wave and third wave of artists...but then Nakata started hitting the house and club music scene and the rest of scene seemed to fall by the wayside. Shibuya-kei was...dead, so to say, but an underdog was secretly keeping the flame burning in the most unexpected places: video game arcades.
Konami's Bemani line of rhythm games are mainstays in arcades and the pop'n music installment has since its earliest inceptions had its roots in the sort of shibuya-kei style music (as well as just about every genre given its focus on slapping buttons, no relation to actual instrument, allowing the producers more freedom. A core of artists made music for these games and remained active outside too, while other groups who were well known in music circles would occasionally loan their tracks to the game. Nakata himself lent a song at one point under his polyphonic room pseudonym, and bands like three berry ice cream collaborated often, comprised of members of the core shibuya kei group "Bridge". Meanwhile bands like risette released regular CDs while putting out songs for Konami periodically, and . Cymbals licenses

It's not wonder that a love of rhythm games, shibuya-kei, and the artists within would eventually come together to assemble an event called Guitar Pop Restaurant, now in its 35th installment and going strong. The event puts together groups of the shibuya kei genre and groups from rhythm games, often groups that rarely if ever play live shows nowadays. Its a real treat if you're a fan of both, but a real hassle given that the events only happen a few times a year and my trips to Japan never really match up. Last time I made a reservation to an all-day installment, an extra special Guitar Pop Restaurant featuring the likes of Hideki Kaji, a big name for sure, but couldn't make it in the end because of schedule conflicts (I spent the entire day packing for my trip home and making multiple trips to the post office near my hostel in the rain). I gave up on the idea given the event's central location of Tokyo, but was astounded when they announced a gig scheduled here in Nagoya, a rare occurrences for sure, and one in my favorite venue K.D. Japon. 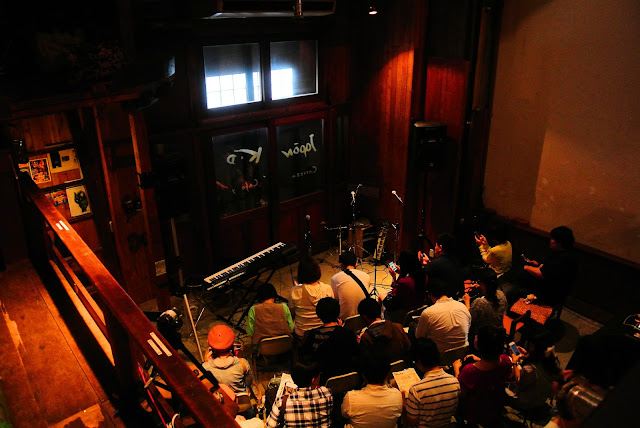 This special event was host to a plethora of young vocalists and the talented composers attached to the latest versions of the pop'n music series. The songlists for these games are hard to keep up with and I confess to not being familiar with most of this fresh talent that Konami has picked up, so I made multiple trips to my local arcade to brush up on some of the names I saw on the roster while brusing my hands trying to get used to smashing those big round buttons again. ]
The real treat, especially for someone more keen on older music from the Bemani series, was the finale: Kiyotaka Sugimoto, a name that might not be familiar with too many music game aficianados but ﻿whose music is surely familiar to all. Sugimoto has composed and remixed dozens of tracks across Konami's rhythm game series under all sorts of pseudonymns(DJ Simon, Doctor S, etc.) rarely using his real name. He has also performed as a part of the aforementioned second wave of Shibuya-kei guitar pop acts with his band orangenoise shortcut(another name familiar to rhythm game nerds) for a number of years before disbanding. I grew up his Beatmania 5-key remix work, the most challenging in the game, as well as his guitar pop compositions in the older pop'n music entries, and this would be the first time I could hear him perform live. 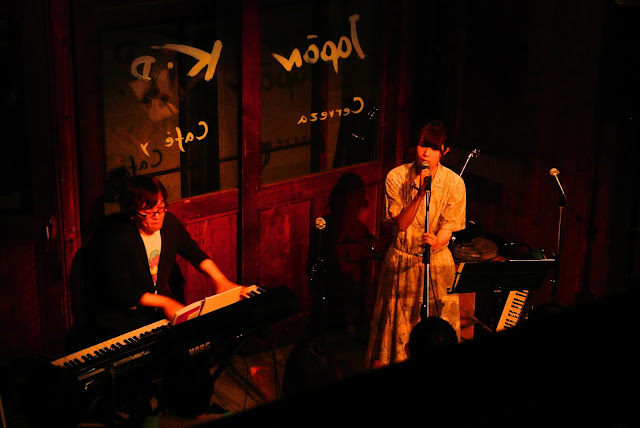 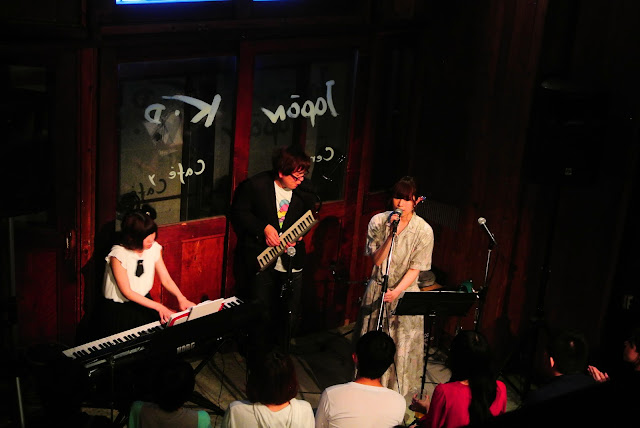 The night's performances took the form of a pairing of a vocalist with a composer accompanying them on piano, although the show saw a few occasions of crossovers and collaborations. After a short DJ set by Toranosuke, consiting of guitar pop/shibuya-kei tunes, the first act took the stage.
mami is a regular contributor to the new pop'n music series and she was backed on the keyboards by Yuuji Yoshizawa, a composer and keyboardist who often goes by the moniker red glasses. When he switched over to the pianica, m@ sumi took over the keys, another talented young woman who has contributed compositions to the pop'n music games and collaborated with various other vocalist on the bill. 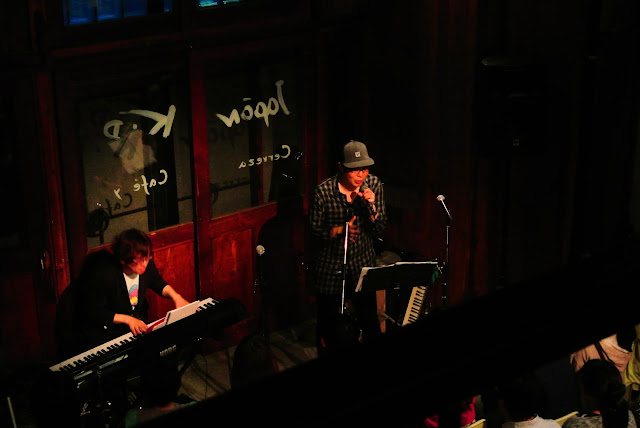 Besides the finale, vocalist Akinari was the only other male vocalist on the set last night. His vocals appear on a number of pop'n music tracks composed by red glasses, and Yuuji is shown here accompanying his vocals with piano, probably when he sang a version of the hit by Hoshino Gen. 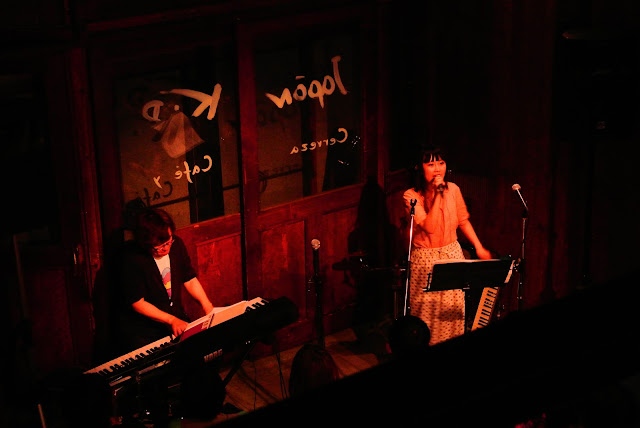 NU-KO had a bubbly personality and a cute idol voice to match and I enjoy a lot of the bubbelgum J-pop she does for the pop'n music games. Out of all the artists at the event, I think she is one of the more well known. 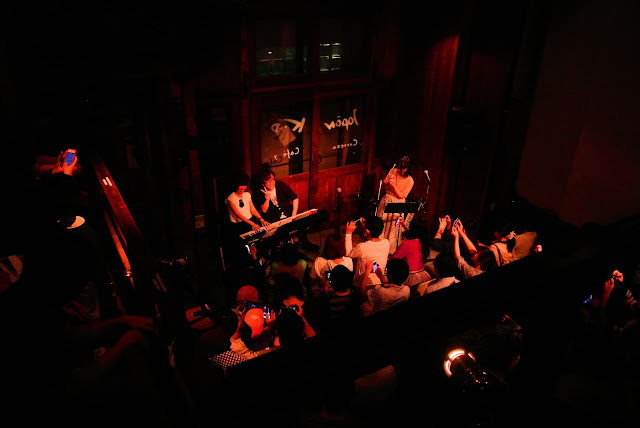 Before transitioning to m@sumi's projects, the two composers paired up for an instrumental duet on the keyboards, playing some Bemani classics to the delight of the audience. 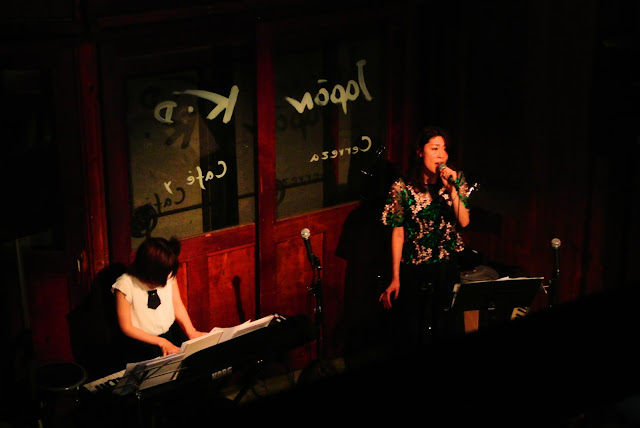 After this, m@sumi got behind the keyboards with vocalist rino, performing as a duet under the moniker plastic penguin. 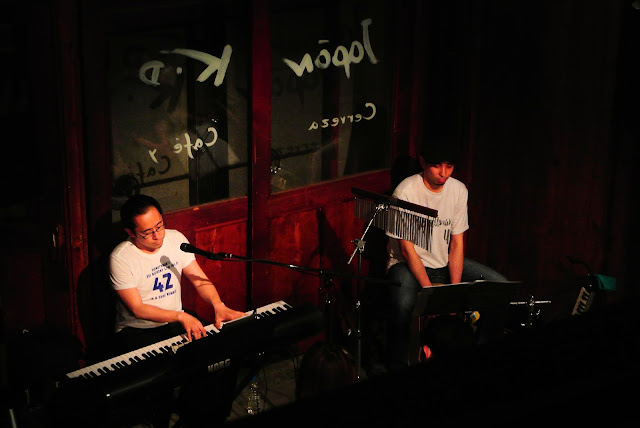 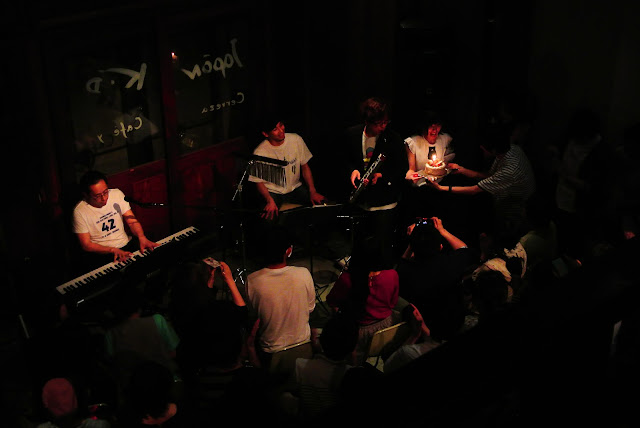 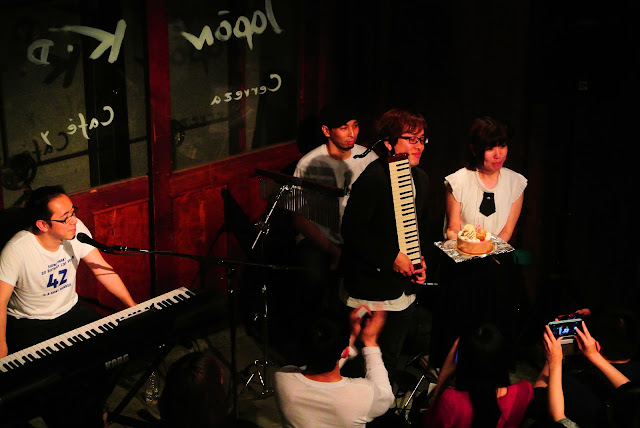 After Sugimoto performed, the organizers presented a cake to the two wonderful composers who both celebrated their birthdays the week of this event. 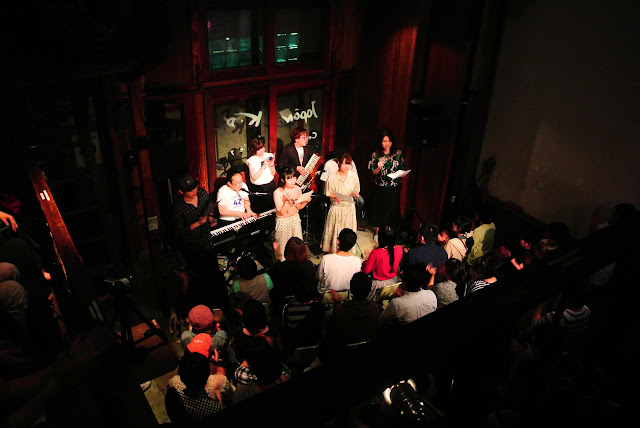 The finale was a gathering of the entire cast on K.D. Japon's tiny stage, performing some encore songs like rhythm game idol group HinaBita Bitter Sweets' "Chocolate Smile," with vocal duties shared among the entire vocals cast, much to the chagrin of the reluctant Sugimoto who was a little put off by the idol songs demands on his vocals.