I was just reading a wonderful article about the resurgence of interest and subsequent repressing of Midori Takada's masterpiece Through the Looking Glass , which exemplifies how file sharing and streaming websites aren't as evil as they seem and can actually come full circle to benefit the artist.
The Japanese band Lamp has garnered a following outside their home country in the same way, through file sharing and outlets like Youtube spreading their chill, wistful 70s infused light pop music to eager listeners around the globe. Its hard for me to categorize Lamp's music by genre; there are touches of bossa nova, tinges of the infamous "city pop" genre, and 70s AOR, but whatever nomenclature you fancy their popularity rests on the interplay of male and whispery female vocals over pleasant light indie pop music. When I listen to Lamp I always think of a sunny summer afternoon, a girl wearing a one piece dress with an umbrella over her, and rain falling down on a window. The video for "Sachiko" off the band's latest album is the exact imagery that comes to mind: the beach, a cafe, scenes presented with muted hues of blue and green on grainy film from a 16mm video camera.While the band wasn't too happy about the fact that their music was being pirated and streamed for free on the web, they took the opportunity to capitalize on their namesake by offering their music for purchase digitally, repressing their out of print discography on CD, giving the vinyl treatment to some albums, and even taking to the road for a recent tour of Asian cities.

The latter is exceptional in that Lamp has never quite been a touring band (consequently, this may be why they were so opposed to piracy: unlike most bands, they had no revenue from merchandise or concerts) and preferred to take their time in the studio, releasing an album or EP once every few years. When they did perform live it was a big deal, not just because of the rarity of the event (I read somewhere they were all quite shy, too) but because of the ensemble needed to recreate their music onstage. Lamp consists of only three musicians at its core: Nagai on lead male vocals, Sakakibara on lead female vocals, and Someya, so their stage lineup demanded the group to organize an outfit for the stage that consisted of members to cover all of the other instruments. Skipping the hassle, the band recently embarked on a mini "acoustic" tour, with just its core members and one support member on stage to render some of the band's older material for the first time as a minimal live outfit. Given the chance, I could care less how the band decided to perform. I just wanted to finally see Lamp and since the tour took them to Nagoya this time I jumped on board and looked forward to spending another night at my favorite venue, K.D. Japon in Tsurumai. 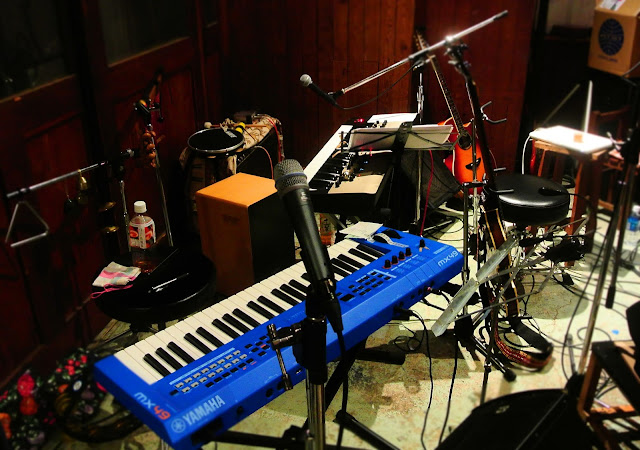 The smaller personnel might have suggested a sound not as full or at its best but it actually suits the quiet tones of Lamp's brand of pop music quite well. The four musicians on stage crafted a sound that was quite close to the source material but was also unique in itself. Sakakibara and Nagai traded vocal duties while Someya remained on guitar, and the members frequently rotated on bass, acoustic guitar, and keyboard duties. Sakakibara also played the flute and the synthesizer keyboards, while others also contributed various percussion(shakers, triangle, etc.) throughout the songs. I never realized there was this much going on in their music but it all came together quite well and defined the band's attention to detail in their music and the care that went into rehearsing for this small show.
Sakakibara's voice resonated quite well and was beautiful to hear in person, even moreso since I had a seat in front of her. Someya had some stage fright but got rid of it after a few tracks, and Nagai, who provides the lead male vocals, soon expressed his frustration at some of the song choices for the night. Someya explained that only having songs with vocals by Sakakibara would not make for a well rounded presentation to the audience, but Nagai retorted that he particularly hated the song "Tsumetai Yoru no Hikari" (Light of a cold evening) and was convinced he would never sing it again in his career, despite cheers and laughs from the audience. I'm quite fond of the song myself but after hearing Nagai sing it live I can understand his resentment for the track: it's a strain for the vocal chords for sure. For those interested its the seventh track of one of my favorite Lamp albums.

The wonderful venue of choice is one that I've already said quite a little about in this blog before, but it really warrants another mention in the context of this gig in particular. K.D. Japon looks more like an old fashioned cafe than a live house. Its wooden structure made it feel like a cabin and its decor of unmatched little chairs with handmade cushions complimented the look. The second floor loft is accessible via a rickety winding staircase, and the entire place, situated under a high ceiling, was bathed in a warm orange light. The perfect atmosphere for framing the band's light acoustic sound, much more intimate and picturesque than a typical live house would be. 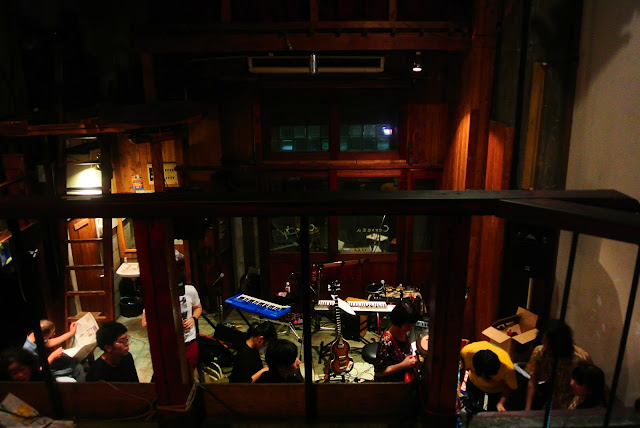 The show ended in a flash with only about 13 songs plus an impromptu encore the band was reluctant to perform--I forget which song, too. After the gig the band offered numerous CDs for sale, the latest repressing of their vinyl of the album Zanzou out later in the week, and a chord book, plus they offered to sign anything for fans patient enough to get in line. This would take a while, so I decided to have a plate of the venue's curry and took it up to the second floor loft. Tasty as always, priced well(650yen is cheaper than the thieving chain restaurants), and highly recommended--but maybe not during a full house. 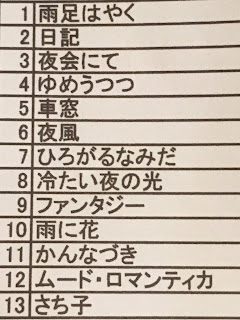 The band was nice enough to sign my copy of one of their older CDs, Zankou, which I explained to them was the only one of their albums I had yet to own, making it even more special to me. I regret not bringing all their other CDs from home... 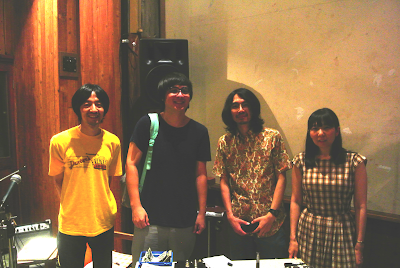 Afterwards I completely forgot to get a picture with the band and ran back to the venue to get one. The band isn't particularly outgoing, but they were nice enough pose for a picture and chat. Given the odds of Lamp doing another gig I can actually attend, even if this ends up being the only time I see them live the occasion was unforgettable.