I've always enjoyed seeing both huge, headlining acts and smaller indie outfits when I travel to Japan, but even if its rewarding to see these acts I've always seen on youtube or heard on CDs finally perform on stage, the entire process is a far cry from the tiny intimate shows I remember going to on Guam during high school. There was rarely a stage or any expensive equipment, everyone stood around the band performing, and even if things were very unprofessional,sometimes I kinda of miss this very DIY network of gigs that weren't governed by the live house system, even if it meant that the sound wasn't all that great. 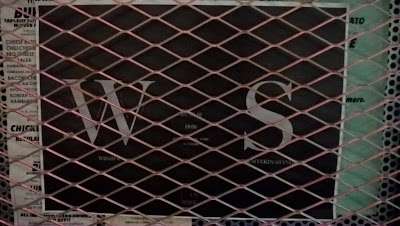 Seeing Nagoya's post-punk underdogs WBSBFK and Sekaiteki na Band today at Kakuozan Larder brought back a lot of memories of going to these small, intimate shows that were just for fun. "I feel like we weren't performing in Japan," one member said in a discussion held right after the show. Then, pointing to the two red letters at the top of Larder's sign he continued, "I feel like we're in LA or someplace like that." Gigs this small, where the band is literally a foot away from you and isn't up on a huge stage, rarely happen here. 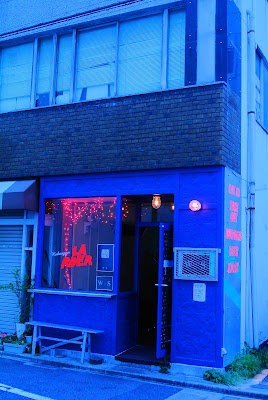 Larder is a hole in the wall restaurant that serves up burgers, imported beer, and great american-style food right outside Kakuozan's subway station. It's blue walls are hard to miss. I found out about the gig by coincidence when I stopped in a few days before. The owners are really friendly, cool people, and besides the great food they play great music and have some really cool decor. The shop also sells its own merchandise in a small corner at the back, some gnarly designs that remind me of underground comic culture, and is all worth a look. 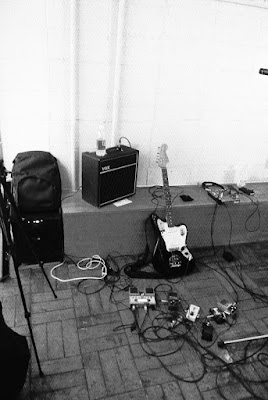 Even after relocating the decor to the sidewalk there was barely enough room inside for more than a string of people lining the wall and sides of the counter with the band set up in the center. Equipment was minimal: the drums consisted of a kick, snare, and hi-hat, the guitar had a minimum amount of pedals, and the bassist was so close to the crowd he was ready to assault the girl in front of me as he grooved. It was hard to move, but it was so much easier to enjoy the music when it was just all right in front of you. 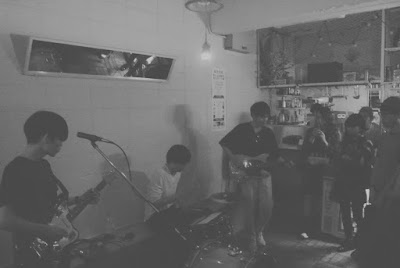 The bands did away with MCs and the songs were short bursts of energy that soon began to melt into one another; it was easy for me to get too into the music and sort of zone out. The simple setup didn't hurt either of the band's styles too much: the bass was already really strong and even though I remember the bands using quite a bit of distortion on their guitars, it all came out so that less was more. Even the drummers made brilliant use of a kit that was just kick, snare, and hihat(though a tom was brought out for one set), and muted with towels taped on the tops. 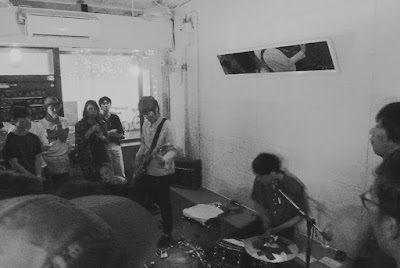 I was upset to read a post in which a band I respected had taken a stab at websites like bandcamp that incorporate a "name your price" option for purchasing music. According to them, fans can't be trusted to understand the value of music made by professionals. Too many of them would underpay--or just not pay at all-- if that was an option. Yet the gig at Larder, billed as "pay what you want" on the flyer, seemed to do just fine. When the last song was done, one of the Larder staff passed around a plastic container and reminded everyone that the money was to help the bands finish up recording. The bottle was nearly full of paper bills when it finally made it back. Larder, too, seemed to do well and served up a number of burgers that night and tons of drinks, even without an obligatory drink order or added drink charge of some kind. 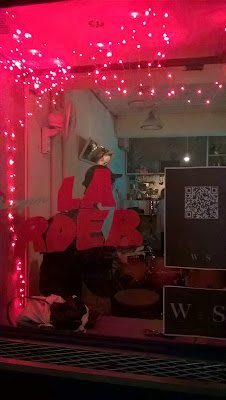 Shows like this don't happen to often in Japan, in Nagoya, and even at this little venue. Even if they aren't hosting gigs, Larder is always open for some cold beers and mouth watering variety of burgers(camembert cheese and pecans, anyone?), so if you're like me and craving for some good old American food, its a nice excuse to go up to Kakuozan.

Check out Larder on Facebook and Twitter, and the bands WBSBFK and Sekaiteki na Band.
-
Chris
Posted by Chris at 10:48 AM