A scene from "Hedgehog in the Fog" grabbed my attention when I saw it on Nagoya mini theater Cinematheque's monthly flier for a series of short works by the Russian animator Yuriy Norshteyn. The named seemed familiar, and as I read the film synopsis I realized that Studio Ghibli director Hayao Miyazaki had probably praised the animator at some point in his writings. It's not everyday that you hear Miyazaki praising other artists - in Starting Point he disparages over the sorry state of animation and lack of imagination in the industry, so praise doesn't come cheap from Japan's greatest. I like animation and was curious to see something different: you don't get many chances to watch Russian animation in a movie theater either, so I made my first trip to a prolific mini theater nearby. 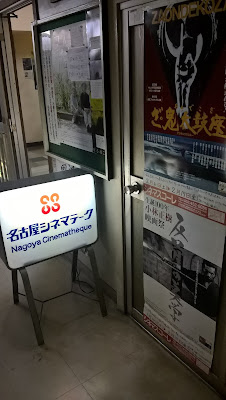 Cinematheque is a tiny cinema in Nagoya's Imaike that I walk past often. There's great ramen nearby(Ichibanken, really, everything is good), the live house Tokuzo(havent been there in a while but great bands frequently stop by), a record store that opens until midnight(the owner is nice, and I picked up a lot of cheap 80s idol music here), but I could never catch the films I want to see at Cinematheque, located at the end of this street on the second floor of the Star building.
The hallway leading up to the cinema has a Chinese food store, an interesting used book shop, and is plastered with countless posters for a variety of Japanese and foreign films. The viewing space is small, probably no more than 50 chairs, and most of the seats were filled. I went to a few screenings at the other indie cinema, Cinema Skhole, and there was never more than handful of people. Seeing the auditorium populated was a surprise. 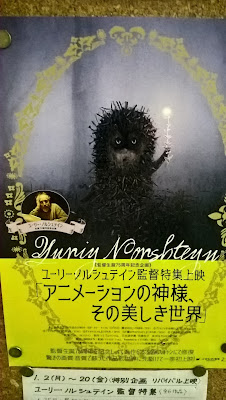 The program was a collection of works by Norshteyn that were originally released in the 1960s and 70s but were touched up and remastered. Each film was presented on screen in jarring clarity making that rendered them in high definition - it was hard to tell that these were produced decades ago.


Of course, this isn't just about the surface, and perhaps what really makes his images seem so real on screen wasn't the touch up work at all. The Russian animator's attention to detail in all of his films took meticulous work and an eye for perfection, all of which spoke through the vivid movement in his worlds. Norshteyn's prowess as one of the world's greats is easy to see in any of the films. His techniques makes the characters lifelike but they also possess a quality about them that still feels surreal, make believe, and animated without feeling unnatural.
While the quality of the animation itself was consistent in all the films, his fairy tale-esque narratives were more eye catching and entertaining than his early films. "25th October, the First Day," captures dealt with the Soviet Union, and "The Battle of Kerzhenet" was based on historical events, using church-style paintings. Perhaps animation just works better with the fantasy motif, which the rest of the films were based on. "The Fox and the Hare," is a folktale with a style that looks picked right out of an elegant children's book. I found myself laughing out loud at the love story in"The Heron and the Crane," a timeless tale of the back and forth attraction between two indecisive lovers. His renowned "Hedgehog in the Fog" lives up to its praise. Norshteyn renders the trek in the forest in beautiful dark tones that best represents the terror of this vast, unknown, and barely visible space. He mixes in a little bit of humor with the ever prying owl who tries to frighten the hedgehog and adds the mystic image of the unicorn into the film as well.

His longest film rounded out the program, "Tale of Tales," a 30-minute animation that was much more abstract and difficult to follow - made even more incoherent to me because I couldn't read all the subtitles in Japanese. It's story is based on a nursery rhyme that expands into a world of symbols and signs, weaving together the realism of his first films with the make believe works of his fantasy shorts. A lot of the scenes are etched in my memory - the child breastfeeding, the yak standing upright, and the symbols of war.It's a contemplative piece that some deem not just the director's best work, but one of the best animated films ever, though I would have to see a properly subtitled version before I give a more in depth analysis.


Most of his work is on youtube and I've embedded all of the films I saw at this showcase though they might not be the remastered versions I saw in the theater. Norshteyn's work is amazing, and his current project, an adaptation of Nikolai Gogol's "The Overcoat," has been in the works for decades. Let's just hope his strives for perfection and attention detail roll out the finished film soon!
-
Chris
Posted by Chris at 8:20 AM