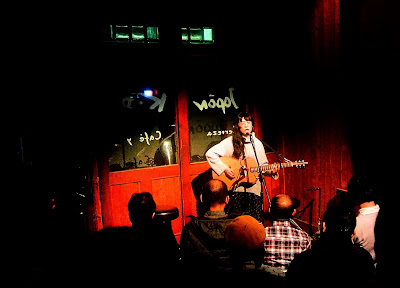 I'm a big fan of Satoko Shibata but I have to admit that when I heard she was doing an event with a bunch of other acoustic artists in Nagoya I wasn't immediately sold on checking out the gig - she's a fantastic artist but not one that resonates with me on, say, an Omori Seiko kind of level. What did get me on board had nothing to do with the music - it was the venue. I've been to quite a few nice little basement dives that allow an unheard of degree of intimacy (see Mir's studio gig - the first and only time I saw the mythical Tokyo three-piece) and interesting decor, but the ambience complimented the experience - my primary purpose always being to see the artist/s in question, with the venues being the icing on the cake. This time I felt strangely drawn to the event after I saw the K.D. Japon website and read a little about it online. Its wooden walls with a stage just an arm's length away from the audience, in a little space that looked more like a log cabin than a live house - how cool is that? There was a loft on the second floor too, and a wide array of drinks and food that made it seem more like a restaurant than a music venue. 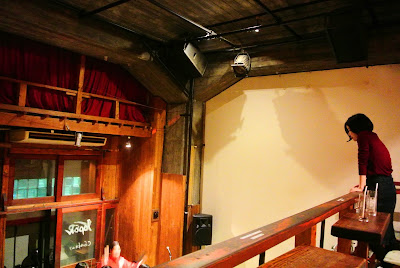 KD Japon is tucked right below the tracks to the JR Line trains near Tsurumai station, and it's an easy find if you follow the railway. It isn't too far from my dormitory and I ended up taking my bike there and parking it by the roadside. 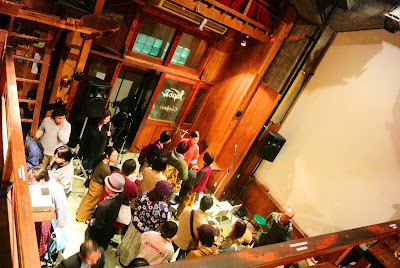 I had the pretense that the show would be small, intimate, and I could enjoy the night sitting down a few feet away from the artists, basking in the dim lighting. Instead, it was packed: Shibata Satoko and the rest of the artists had drawn quite the crowd. I should have thought about that before being fashionably late, which ended up earning me the coveted spot between the bulky entrance door and the counter at the very back of the club (not to mention being accidentally squished a few times by other late comers). I would later get to walk up to the loft but it was equally full, with no one willing to budge, and I slunk back down the rickety winding staircase to the first floor. After every act people would disperse a little bit, giving me just enough room to inch closer and closer to the front, but I never did win access to the little stools that were laid out for the audience and positioned right in front of the stage 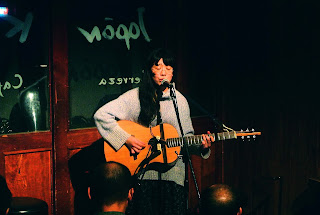 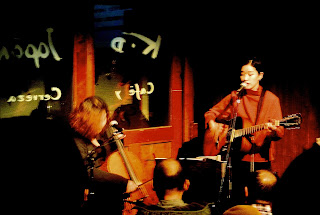 The night was host to a collective of acoustic musicians, the former two acts being male, neither of whom I was familiar with, and the latter two being the headliners, Satoko Shibata and Lee Lang from Korea. Shibata was fantastic, and performed quite a few new and old songs, cute as a button and all smiles during the entire gig. Lee Lang performed with a friend who accompanied her acoustic guitar with a cello, adding yet another dimension to her solemn songs. She tried her best to convey things to the crowd in broken Japanese, often leading to some hilarious MCs and comments that were a little too honest("Shibata is so cute, I decided to take a bunch of candid pictures of her to sell on auction sites!"). It was a fantastic night for music, and even more so for enjoying the place itself. I had a bowl of curry at the bar and sat up top on the loft after the audience had cleared out. Situated under the train tracks, the sound of a train passing overhead was audible during each performance, something that added to rather than distracted from each act's acoustic numbers. It's a superb place to see some music - and eat some really tasty curry - so I hope I have a chance to stop in again soon. 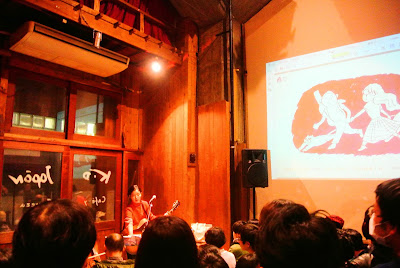