Bedroom composer ラブリーサマーちゃん / Lovely Summer-chan's major label debut came as quite a surprise when it was announced out of the blue(quite literally, look at the cover) on her homepage. She's always seemed entrenched in the independent music scene, a very down to earth musician. She started on soundcloud and never released much officially nor did she boast a reputation on the live circuit - often how a lot of musicians get their name out there. She's also notoriously camera shy, so I didn't think that people picked up on her just because she was a pretty face. In some ways it seemed like she didn't want to get too far out there.

But when I hum the melody of her songs to myself it's easy to hear her potential despite the small catalog she has released. Her pop songs are pure pop, infectiously catchy, and boast a kind of amateur charm that's hard to resist. Her vocals are cute but they easily find themselves at home in a catchy chorus as they do in her more melancholy numbers. She gets it from a background of modern pop and rock music, a lot of which you can see her post to her twitter but that also sneaks its way into obvious nods on her CDs. I didnt immediately recognize the blue background with four caricatures that compose her "Part-Time Robot" jacket, but one listen to the song itself and Weezer's Blue album comes into focus. Not to mention the obvious nod to the astronaut of Soutaisei Riron, Yakushimaru Etsuko's ivocals are an obvious inspiration to LSC's whispery, cute, sound. 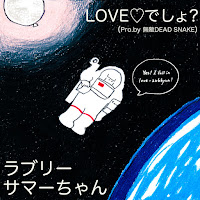 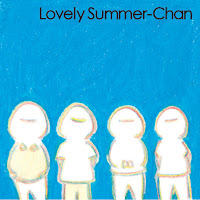 I tried slapping a label on Lovely Summer-chan but neither idol nor singer songwriter fit quite right...which is fine. She can get by without being stuffed into a bag with similar artists. She may not be that unique, and her songs certainly don't reinvent any genres, but she's a budding artist and a great songwriter who shows tons of promise and makes some adorable pop songs.

I was late to the in-store event for Lovely Summer-chan's major debut album in Nagoya. It was hosted by Tower Records but not in Tower Records, and ironically was held outside the West Parco building, in a little corner facing the busy street. I took a spot on the side in front of a Christmas tree and watched her perform through a hole in branches until a guy walked right up to it and stood his ground. I stared at a Christmas tree for about 30 minutes.
Nevertheless, it was difficult not to be as excited as she was during the short concert. She sang along to backing tracks for "202 feat. Izumi Makura" and "Watashi no Sukinamono," and the audience got to participate in call backs for the latter. Plenty of people showed up, too, and the steps leading down to the lobby where she performed were full. Passers by would flock down for a second to watch as well.
She sang the rest of the songs to piano accompaniment, giving up on her bright red guitar after some feedback issues. Suisei sounded beautiful, and she gave the signal for the crowd to unleash the bubbles she handed out at the start of the show in time for "Anata wa Tabacco, Watashi wa Shabon." "Since the event is outdoors I've always wanted to do this" she said, and giggled while bubbles  landed on her and got all over the audiences before blowing back into the wind. It's a shame pictures weren't allowed at the event - it would have made for some interesting photos.

It was a colder than normal day, especially after a few days of sudden warm weather. The outdoor location of this in store event meant that the post-concert CD signing had to also take place outside. The que was rather long and I was at the back too, but the staff and her manager were nice enough to apologize every chance they got for fans having to endure the cold outdoors.
When I got closer to the front I could see Lovely Summer-chan behind the table shaking each person's hand and signing their CDs while making small talk and exchanging laughs and smile. They felt genuine, too, and my predictions of a forced event with an artist reluctantly greeting fans began to fade into something much more pleasant. When it was my turn she asked me something I didn't understand about the little pouch I brought my CD and quickly realized I wasn't from Japan. We talked about Guam and she laughed when I told her I couldn't even remember how I had heard about her music. The cold was awful, and when I shook her hand to leave she apologized again for the wait. I had forgotten about the cold, and didnt realize my hands were probably freezing. 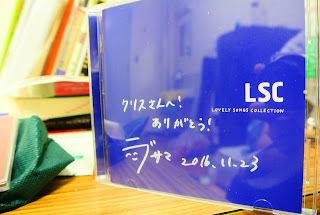 If you haven't listened to Lovely Summer-chan, you can preview tracks from her major debut album spliced into the music video for Kimi wa Tabacco, Watashi wa Shabon :

Some of her indie releases, a few singles and an EP, are also floating around CD shops. Her soundcloud account is also still up, and she will be doing events around Japan to celebrate her album.