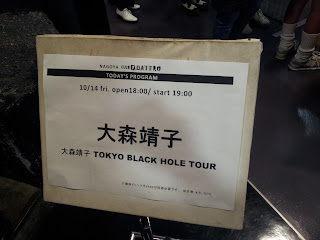 Oomori Seiko kicked off the second wave of shows in her TOKYO BLACK HOLE tour with a gig at Nagoya Club Quattro. This concert is the first featuring Seiko’s new backup band of talented musicians from across the board performing what I predict is quite a varied set list than what she has done thus far during her acoustic shows that started the tour.
About ayear ago I saw Seiko for the first time on the same stage (officially, anyways, since last time she was just a guest for another act), and this marks the second time I would have the chance to see her in concert. I thought this a funny coincidence, and Seiko herself commented on her previous visit too, only she recalled something much more profound. She remembers that during the performance she was carrying her child, who just turned one, something that noone in the audience was aware of until weeks after when she made the news public. “I wasn’t bouncing around as much last time because my baby,” Seiko said in an MC, “but now I can really go all out.”
Unfortunately, it was the audience who was having a little bit of trouble bouncing around this time around. I was a little disappointed that Seiko’s on stage antics were met so passively by the crowd, who simply stood there in place not so much as moving an inch to the swells of sounds flowing from the speakers. Last time I fondly remember being swept up in a mass of people and ended up right at the front, but this time it seemed like the crowd was as careful as Seiko had been a year ago, albeit I doubt all of them had a growing baby inside their tummy’s. 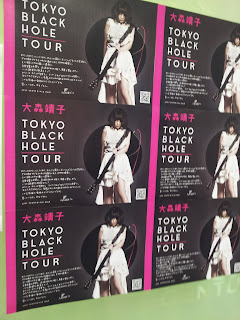 The stoic aura had little effect on Seiko herself, who delivered a brilliant performance of songs new and old, with a bulk from the Sennou and Tokyo Black Hole albums. The title track of the latter had less of an impact when performed live(although it still brought yours truly to tears), and I’m not sure if this was because of the lousy sound system, the downer mood of the crowd, or something internally with the musicians at work behind the goddess herself. Pierre Nakano of Rin Toshite Shigure, for all his drumming prowess, seemed less of a stage presence than I imagined, unless most people are just dwarfed by Seiko's aura. On the contrary, I’ve finally become a fan of Tokyo Black Hole’s final tracks, which some fans praised but I could never quite accept as being very good. These were performed during an interlude in which Seiko took the stage alone and performed some tracks acoustic, proving that anything she does is gold, with or without the bells and whistles of a fancy studio recording mix, and in this case made the aforementioned tracks all the better. Other highlights include the band throwing down their instruments for the thumping pop portion of “Watashi wa omoshiroi zettai omoshiroi tabun” and dancing in unison, and Seiko’s “pretty manager” coming on stage to help sing the intro for “Gekiteki Joy~ BeforeAfter.” I didn’t catch their names, but the women who are part of the backing band were superb on their respective instruments, and it was nice seeing some gender diversity on the stage behind the goddess. 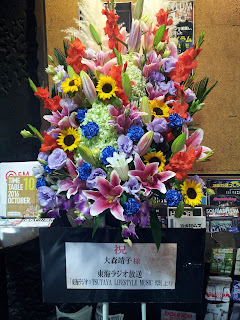 Seiko never fails to awe in crowd involved even at the larger shows at less intimate venues, despite her being a major label artist that's almost cosigned to ignore her fans altogether because of her ascension to another plane of existence. Instead, she incorporated the crowd into sing-a-long chants to the chorus of "Zettai Shoujo," separated into groups of girls and "old guys," and even let one lucky girl, the winner of an impromptu rock-paper-scissors showdown, to sing solo. During the bridge of one song she passed the mic into the crowd and commanded everyone to yell in it to their heart's content. At the beginning of the show the audience was given a printout of lyrics which we were told to read to ourselves while the band sang along to it on stage, further solidifying this sense of community between ourselves and the band we were watching on stage, and feeling a lot like we were all back in grade school music class.


I never thought that being packed into a hall with a bunch of people I’ve never met would incite more of a sense of belonging than any other environment or event I’ve been to since arriving in Japan. Yet here I was, bobbing my head to some of my favorite songs without a care in the world as to who was watching, keenly aware that no one would judge me with as sharp a point as they would if I were to step outside the doors of the live house and onto the street. We were all here to enjoy the same music, so we were all “weird,” and quite frankly I doubt anyone really cared. Given how ill I was feeling in the week leading up to the event, it felt like the therapeutic kind of experience I needed, giving me a time to relax, unwind, and feel somehow more connected to these strangers via an invisible string of fate, no doubt weaved up, around, and through us by none other than Oomori Seiko.
All I could do to say thank you was pick up a cool tour T-shirt (the pink one I plan to invest in when she returns to Nagoya in November) and a shopping bag with her beloved Nana that touts a curious illustration of Seiko's world that I doubt I will ever use for anything practical. It is, however, nice to look at. 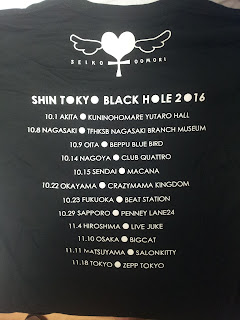 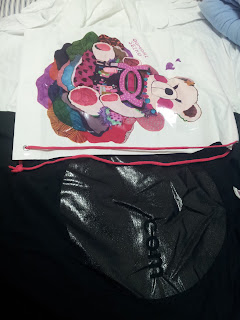