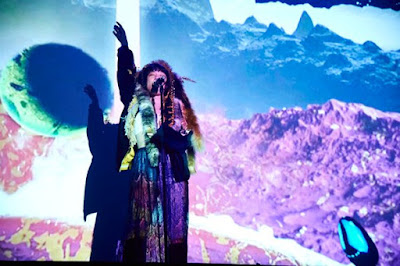 Because I don't live in Japan, perhaps the biggest inconvenience to me is not being able to see all these great concerts that go on for artists I like when I want to see them. Concerts are sometimes great leaps into the unknown that unearth numerous musical discoveries or opportunities for me to reaffirm my love for an artist I used to obsess over. But nothing beats going to a gig when I'm completed and utterly obsessed with an artist, when my interest is at its peak.

So imagine my chagrin when the perfect day for a Suiyoubi no Campanella / WEDNESDAY CAMPANELLA concert occurred during my trip and the tickets sold out in just two hours. A friend of mine apologized - even he couldn't get tickets to a small Suiyoubi no Campanella show days before at a local club - and I was disappointed I would be missing the one artist I had listened to so obsessively in the months prior to leaving to Japan. Not only was my interest at its highest point, but Suiyoubi no Campanella was also reaching a milestone in their career and becoming a lot more popular. The sold out gig in question took place at Liquid room, a pretty sizable concert hall in Tokyo that followed an equally successful(see: sold out) tour of Japan, plus getting spread about on the net via word of mouth (kyary pamyu pamyu helped and is supposedly a big fan). The concert would mark the artists departure from the confines of the underground club circuit and into the ears of many more people. I myself had been listening in to the artist as this was all unfolding and I had savored every music video and every track on their prior EPs, doting on each release and never wanting the music to end.
It was terrible that I couldnt see them...but then came my saving grace - a kickstarter-esque website was created to give people the chance to pledge for rewards related to the show. You could pledge for images, an audio recording, or HD video footage of the concert and I opted for the complete package, thinking it was better than not being able to go. On the top there was also an option to pledge a paltry sum of 1000yen($10) for a chance to win one of 10 extra tickets to the gig. It wouldnt hurt, I thought, so I kept that day open in my schedule. Then, miracle would have it that one day at work I glanced down at my phone to an email with a vague title - containing a winning ticket to the gig. I guess I'd be watching it from my computer and attending afterall.
---- 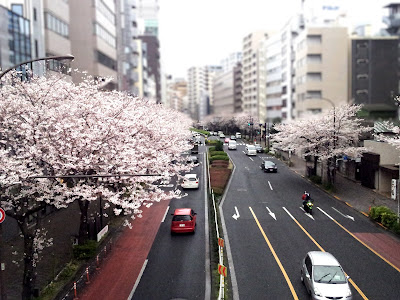 I rushed back to Tokyo from Nagoya after seeing two shows there, with the Suiyoubi no Campanella gig to round out the weekend. I stopped first in Ueno park after hearing the cherry blossoms were in full bloom before heading to the gig later that afternoon. The dress code for the show was red or blue, the theme was to have the audience dressed like the Onis(Japanese demons/monsters) that were the theme of the show's title "Take me to Oni island!". On the subway I saw a few people in the train dressed in matching colors who I would later see at the show and felt a little out of place with my plain, faded red jacket. 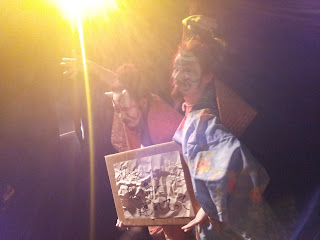 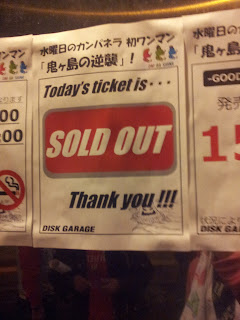 Plenty of people had already gathered inside the venue well before the gig was to start and I lined up to grab a poster and some CDs, then wandered around the neighborhood for a bite to eat before they let people in. Since I won my ticket, I was the last to go inside the venue and by then it seemed like an endless stream of people had already been inside.
The stairway was lined with posters of a fake film starring the group, styled like an old Japanese film poster. Once inside the hallways blared tribal music and had two folks in Oni garb greeting people entering. It was sweltering hot and the crowd made it difficult to move, but I wiggled to grab a drink, downed it, and finally went inside. Being last, the entire floor was already full as was the back of the stage but I was keen on getting as close as I could and found a spot on the floor to squeeze into. From font to back the place was completely packed. But it wasn't long before the loud hum of the crowd was silenced as a movie came on screen and signaled the start of the gig; see below.
---

I've always thought of Suiyoubi no Campanella as a kind of chimera - as a group, they seek to engage multiple senses while also having so many different facets to them, so many things to appreciate, that it feels so encompassing to be a part of their experience. It's not just an aural experience comprised of music, it's visual, ala their attention to detail on music videos. It's not just komuai's vocals, but Kenmochi's track making. It's not just about a unique live performance as it is about the studio recordings. This idea was cemented at the very foundation of the gig, with a combination of komuai's stage performance, antics, vocals, and background videos moving the performance along and making for a unique live show.


Then of course, you had various highlights, like seeing "Mitsuko" (above) with an accompanying stop motion video taking us through Tokyo's winding streets and right up to the Liquid Room venue. A similar new approach was also done for Marie Antoinette where Komuai struggle to throw   Or in "Inca" when the group of performers came out and had a tussle with Komuai on stage. There was also a semi-failed attempt to live broadcast the merchandise table from just outside the concert hall - there were some technical difficulties and Komuai ended up just bringing the shirts out and showing them that way. She leapt into the crowd after a few songs and took a Go-Pro strapped to her microphone around the entire Liquid Room, weaving in and out of the crowd while trying to sing "Dracula," giving just about everyone in the large room a chance to get close to her.


Things started to wind down and personally I was getting a bit tired myself when the entire stage changed and some unknown music started blaring on the speakers. This was another far out experience provided by a musician who would later be announced as Oorutaichi, a producer for one of Suiyoubi no Campanella's new tracks. His set dragged on a bit, again, probably just because of my fatigue, but my favorite part was his use of this laser animation that reminded me of the targeting computer stuff from the first Star Wars film. Afterwards, Komuai joined him on stage to perform their new track, "Yuta," which also had a really neat background movie that was broadcast across the stage and ceiling.


The night rounded out with Diablo, a track off her new(at that time!) Triathalon EP, featuring the aforementioned track by Oorutaichi as well.

It was a pretty great night, albeit a very tiring one, and I was a little disappointed I didn't get to hear Janne da Arc, especially because the accompanying performance involves Komuai getting onto a makeshift cardboard bus and riding it through the audience...but I was already pretty satisfied with getting into the show of my dreams, being able to catch every single song that came on, and getting to see an artist I probably won't be able to see again - at least because Suiyoubi no Campanella has grown exponentially in popularity since March of last year and has sold out many of their shows.

Anyway, cheers to the next time they decide to do something really ambitious again. It was fun!
-
Chris
Posted by Chris at 11:19 PM