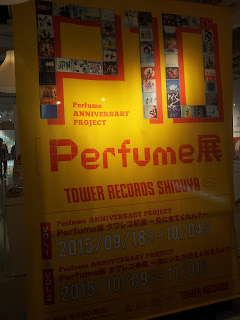 The main purpose of my last trip to Japan was to see one of Perfume's shows at the legendary Budokan venue as part of a bigger ten day series of events meant to commemorate the group's ten year anniversary of signing to a major label.  Part of the festivities included dance contest preliminaries and even an advance screening of the next Perfume world tour documentary movie, showing in cinemas come October. By chance I happened upon one I overlooked: the first part of a small Perfume exhibition being held in the monolithic Tower Records Shibuya's eighth floor event space. The entrance of the massive record store had Perfume on large monitors greeting those walking by to come check out the event.

Tickets were a bit confusing: you could purchase them in advance or at Tower Records and they allowed admission at the top of every hour for the price of 500yen. You had to get in line to purchase the tickets, bring them to a redemption counter, then bring them back up to the 8th floor. An audio guide was also available for an additional 500yen. Pictures were allowed in the event so I made sure to snap as many as I could. After going up and down a few times figuring this out, I finally handed my ticket to the counter on the 8th floor and made my way in. Pictures were allowed, so of course I tried to snap as many as possible.
Member's Rooms 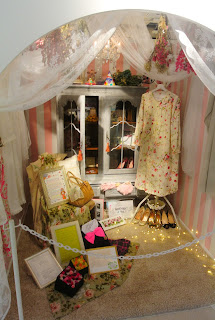 One of the highlights was that each member was able to setup their own "room" in a corner of the exhibit. Once you enter, A~chan's room is off to the side and is the most decorated of the three, with a plethora of little details and small memorabilia that keep your eyes looking for something you may have missed. I'm sure it's what anyone would expect from the girly A~chan! 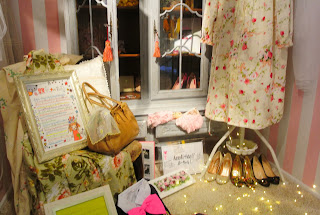 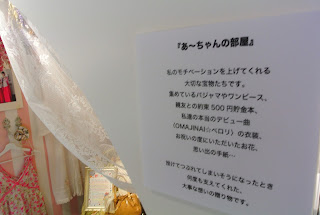 Nocchi's corner was much more simplistic, organized, and chic. She put up various trinkets that meant a lot to her and I believe the rocking chair in the center was a gift from the other members. 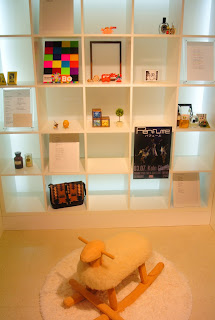 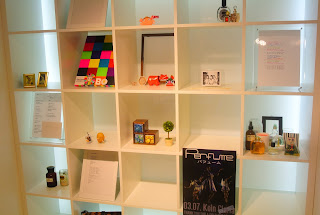 Perhaps the most bizarre was Kashiyuka...her "room" consisted of just a single item on display. The text reads that she received this special gift from Nocchi and A~chan and just the site of it made her really happy. Interesting choice! 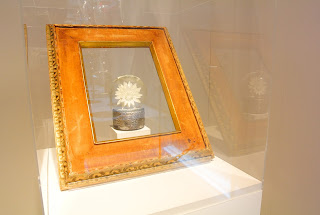 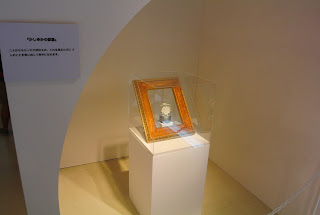 The Perfume exhibit had some of the girls' most recognizable outfits on display, placed on mannequins doing their signature dance poses. In a video that played at the exhibit, the members mentioned that although they wanted to put some outfits on display they were unable to use some because they had become completed worn out due to using them so much. Here are some they were able to use: 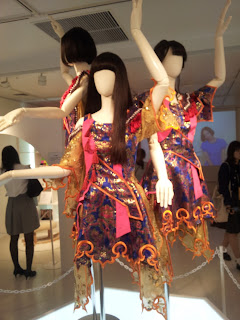 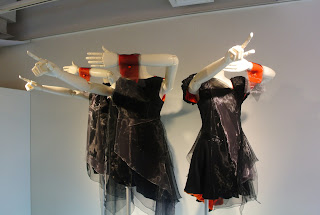 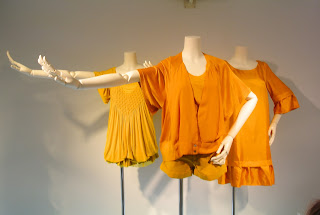 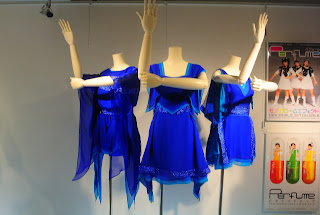 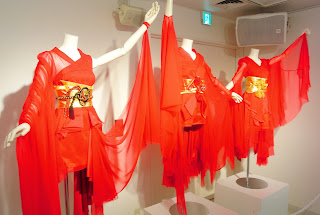 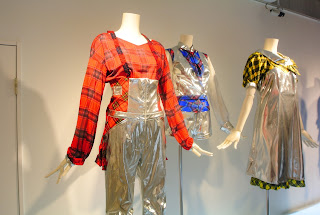 The bonus DVD that came with the GAME album contained a concert at Liquidroom where Perfume wore these outfits. Can't say I really liked them!

The exhibition had a couple of other things on display as well. 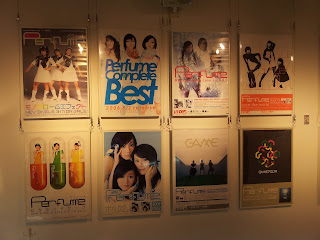 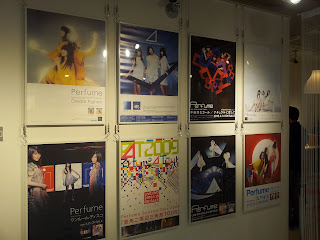 This huge wall of posters lined the wall towards the exit of the exhibit. I'm particularly fond of the Perfume Complete Best and Vitamin Drop posters, although I know they must cost a fortune. 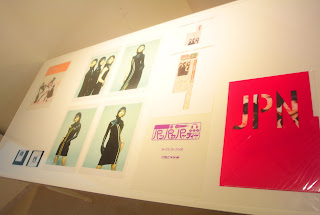 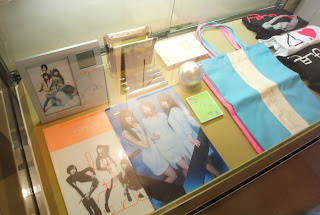 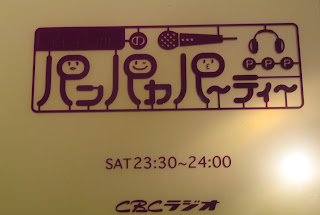 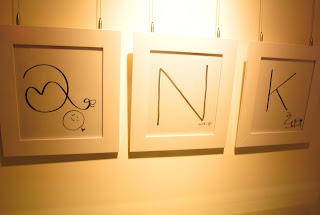 Merchandise and other goods were also on display in some showcases. I build plastic model kits so I was really fond of the logo for the CBS Radio show. There were also T-shirts, pamphlets and other goods from previous tours, and these interesting framed signatures from the girls in which A~chan insisted on not being very uniform with her "A". 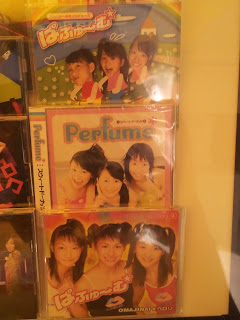 Lastly, upon exiting the event there was a large glass case housing every Perfume CD in existence and just beyond the glass were the two extremely early era Perfume CDs for Omajinai Perori and Kareshi Boushuu chuu, all sought after collectibles for any Perfume fan that fetch a lot of money on auction sites. Just being able to see these copies was alone to satisfy me. 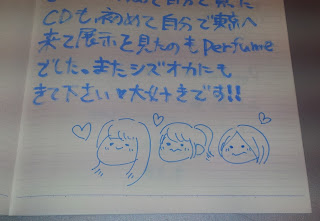 There was a large stack of notebooks and a variety of writing utensils available at the other corner of the entrance for anyone who wanted to pen a message to Perfume. The books were mostly filled cover to cover and most included adorable little caricatures carefully and whimsically invented by fans. I wrote a heartfelt note to the girls in English in my best efforts to stand out among the pages of kana and left the event feeling completely satisfied.

Unfortunately, World PTA members are not able to receive the event exclusive post card as it requires a hard copy PTA ID, something not issued to members overseas yet. The event also has some exclusive merchandise available for purchase although it wasn't anything out of the ordinary. Since I was going to the Budokan concert a few days after, I decided to save my good shopping for then.
The sign says there is a part two in October and I can't wait to see what is put on display then if I won't be able to attend.
Thanks for reading!
-
Chris