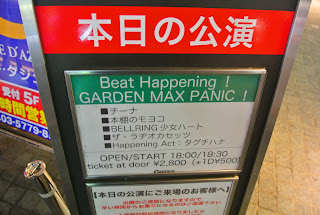 Chiina's second album, Granville, was easily my choice for album of the year when it dropped in the latter half of 2012. Although the band has been to Canada twice on the Next Music from Tokyo tour I mentioned in the harafromhell post, they always seemed to elude my Japan trip schedules by either not having any gigs or traveling to the other side of the country while I was there. This frustrated me until this trip when I discovered they would be playing a few shows while I was there, and one conveniently while I was still in Tokyo. I planned a lot of my travel with this gig as a pillar working around it so I could finally see Chiina. They released another album in the time between Granville and now, Docci, which I listened to a few times while preparing for my trip...yet still hoping they would play more songs from the former. 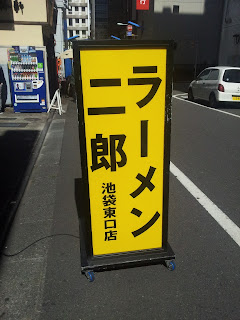 I made the costly mistake of ingesting a little too much for breakfast before stopping by the Ikebukuro location of the legendary Ramen Jiro to grab lunch the day of the show. Afterwards I browsed around a Disk Union right around the corner, picked up some CDs and LPs, and made the mistake of wandering into an anime shop in Ikebukuro - where it's mostly centered on boy's love series and other things for girls. Oops.

The gig was at Garden in Shimokitazawa and since I hadn't been there before and didn't have any other plans I got there an hour or two before the doors opened to find the place. It was simple to find, located fairly close to the station (which seemed to be getting a face lift) off in a side street, so I had still had quite some time to spare before the show. Shimokitazawa is a neighborhood with a lot of character - vintage clothing shops, record stores, live houses, cafes, and bars all line the winding narrow streets. I always pay a visit to the big Village Vanguard store off to the left of the train station. It's full of everything you want but never really need: cool gadgets, manga I've never heard of, everything fun to look at but never to actually purchase. For all the anime/manga/video game related pop culture stuff they have, I rarely hear it mentioned overseas but personally I'd highly recommend it to anyone coming to Japan: check out the cool section they have set up for the cult favorite Akira. 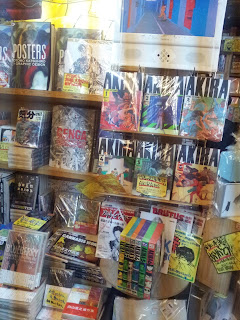 After killing some time and a good portion of my wallet at Village Vanguard I walked back to Garden for the gig. Prior to the show I had only briefly looked up the other acts: Hondana no Moyocco's name was familiar (they seem to have appeared on other shows I was looking into) and I took a peek at the official site of Bell Ring Shoujo Heart to discover they were an underground idol group. Other than those two, Chiina was the only group I was familiar with.


Taguchi Hana was opening the show and by this time there was already a small crowd of Bell Ring Shoujo Heart fans gathered in anticipation by the stage. She came up with her acoustic guitar and played spacey, folk/pop. Her music wasn't immediately grabbing me but her albums seem a lot more palpable, having a lot more substance thanks to more backing musicians.  I've honestly been rather harsh on the acoustic guitar playing types in the past, in my opinion it's a formula that can get really old really fast, but recently I've enjoyed Oomori Seiko and Shibata Satoko a great deal so there's a chance I might regret not enjoying this performance sometime in the future.

After she left the stage I noticed a bigger crowd than before at the back with guests pouring in  by the minute, all of them wearing Bell Ring Shoujo Heart T-shirts of different designs and boasting scribbled signatures by their favorite members. I had no idea the group was this famous - I had never even heard of them before - and besides, who in the world goes to Shimokitazawa, a neighborhood better known for indie rock, to see an idol group? A lot of people, that's who.


The troop came on stage wearing dark colored school-girl uniforms with makeshift black wings draping from their backs, giving off a vibe that also suited their music's slight deviation from the typical kawaii, cookie cutter pop and into one that stressed guitars and rock music over synthesizers and techno. In retrospect,  Bell Ring Shoujo Heart's appearance and music remind me a bit of Baby Metal, but definitely not as METAL. Regardless of this fresh change in idol style, their music wasn't revolutionary, although I found myself humming along when I later watched their videos online and could recall many of the melodies. What they lacked in aural appeal they definitely made up for in the live performance department, owing a huge thanks to the zealous cooperation of their surprising (at the time!) fan base. Enthusiastic crowd goers stood on each others shoulders desperately reaching out to the members throughout the entire performance, and one guy sporting only his underwear brushed his teeth with one hand and reached for his favorite member on stage with the other. I never was able to relay that to my friends in Japan without receiving quizzical looks in return, whether from the absurdity of the fact or my lack of language skills. Coordinated shouts and call backs made the music even more exciting and at one point the girls coached the crowd to swerve from one end of the stage of the over, giving me a little bit of jolt since I suddenly had a bunch of people ramming into me at the left side of the stage. A guy next to me begged for one member to soak him with water, and she voraciously spewed some onto his whimpering face. The finale had the troop on stage joined by a few more members, who I believe were graduating/graduated from the group. In the break that followed fans carried bunches of flowers to them from the back of the live house to the stage. The girls ended with the more daring members standing on some fans shoulders who painfully transported them to the center of the crowd wile wincing and holding back their pain. All the while I was stuck in the corner, watching in awe, and definitely wishing I had looked up these girls before I got here. I was not ready for this.

The girls left little in their wake when they bowed off and took a giant chunk of the audience with them. I was speechless, and the other people in the crowd who remained and clearly came to see other acts were feeling the aftershocks as well. Garden had another floor where the girls were selling their CDs, T-shirts, and doing the polaroid photo signing, but I ended up not knowing about it and decided to stay in to see the other bands anyways - all the other groups had their merchandise setup behind the floor.


The Radio Cassettes had the unfortunate honor of following up Bell Ring Shoujo Heart's performance and they were clearly aware of the shoes they had to fill, laughing and smiling kind of awkwardly during their MCs. The four piece pop/rock band didn't deliver anything very exciting, but the vocalist was giving it his all to try and life the spirits of the leftover people in attendance.

Hondana no Moyoko just stepped off a plane from Hokkaido when they performed that night and commented on how much greener it was in Tokyo compared to the white sheet of snow that still enveloped the northern island where they were based. Their name had come up some times among bands I liked and on bills for concerts I wanted to see, and I was really into some of the songs they played that night. Like a lot of bands, their performance ended up being much more dynamic live than on the recording I purchased after, a kind of dreamy folk/rock peppered with synthesizer and male/female vocals, but their album definitely stuck with me after the show. After the show, I bought their latest album from them and all the members seemed like nice, modest people.


Finally, Chiina was stepping up and I noticed that the old salarymen who had been standing by me the entire time were a little more animated - I would never have guessed they were also here to see Chiina! They kicked off with Granville and played mostly songs off the new album with the exception of the former and their encore, "Kampai no Aisatsu." The band completely lit up the stage - the combination of festive music and the all around energy of the members made it impossible not to dance and move on the floor, as I bobbed my head alongside a bunch of older guys who had all gathered with me in the corner. There are some bands that sound terrible live, or sound great live but boring on CD but, like harafromhell, Chiina sounded great on both. Even if the studio material is more subdued and less dynamic it's still fantastic. It was well worth the wait, although I'm still crossing my fingers to one day hear all the material from Granville rendered live. 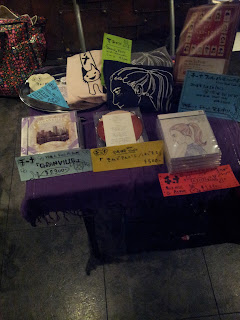 I picked up a physical copy of Chiina's album before I left that night and was able to chat with some of the members: they were all really cool and thanked me for coming all the way from Guam for the show. It had been a long night for sure, but I recall enjoying the walk back from the live house to Shimokitazawa station even if everything was already closed.