It's probably been only a week or two since singer/songwriter...or rather recently major-label signing solo-artist Oomori Seiko announced her latest album "Tokarev," a collaboration with her long time backing band of Koenji musicians, The Pink Tokarev. And on the heels of the announcements we get a tweet from Seiko announcing that the two will no longer be working together:


Seiko's blog gives a long winded and almost nonsensical ("Being free is being constrained, being constrained is being free / Beauty is ugly, ugly is beauty") rant on the matter that isn't really surprising considering her sporadic outbursts on stage. You can read a more formal report on her official website.

If the break isn't a surprise, it's because her last collaboration album with the twangy-guitar driven LaiLaiLai Team ended up pretty much the same way: a whole bunch of concerts together, releasing my favorite album of that year, then dropping off the face of the earth. Thankfully, LaiLaiLai Team is still around and, of course, so is Seiko, so I assume that the announcement probably just means the two won't be together on stage or in the studio anymore. Seiko plays quite a few shows solo too, and given that she's signed to a major record label it's anyone's guess when and who she is going to collaborate with next. I personally liked the way LaiLaiLai Team's sound complimented Seiko's vocals and song writing more than any other work she's done to date and it looks to still be the best thing she's released if the samples up on the page are any indication of what the final product will be.  It already looks like they've completed beheaded one of my favorite Seiko songs (Midnight Seijun Isei Koyuu) with a disgustingly mainstream pop arrangement and a filter that muted all hints of Seiko's vocals that usually sound ready to burst at any moment. The desperation and restraint is totally gone. I'll probably still check out the album when it hits on the fourth of March.

Alongside the first and last album with The Pink Tokarev, the DVD for the film Wonderful World End will also be coming out on March 4th. Seiko is doing the music for the movie, which already premiered in Japanese theaters and will screen at the Berlin film festival. It stars Ai Hashimoto (I saw her in Confessions and most people know her from the hugely popular NHK Asa-Dora Ama-chan) and some of the film has already been revealed as the music videos "Midnight Seijun Isei Koyuu"and "Kimi to Eiga", so we know a little of what to expect. It's looking to be an interesting film if not just for Seiko's involvement but for the kind of gender roles that the girls might be contesting in the film but I have no idea how any of this will go, so I can only hope it turns out to match my expectations. At the moment I'm working on some English subtitles for the trailer of the film and it's nearly done though I have no confidence in it.

Seiko's fame happened like a flash before my eyes - and I still have trouble grasping how far she's come in such a short time. It's definitely the announcement of her involvement with the film that kind of snapped me into it.  *Cue flashback*

When I first saw her it was the 2012/2013 New Year's/Countdown concert at Akihabara Goodman (which I should write about sometime) and Seiko was on vocals alongside the singer of otori with the sporadic, abrasive, and noisy emily likes tennis on instruments. It was an insane performance that juxtaposed brief gasps for air in which Seiko and the vocalist of otori talked extremely cutesy to one another only to jump headfirst into the insanity again with shrieks and growls together with the band's destructive sound. I had talked to someone beside me who was totally enamored by otori's singer, but I was totally taken by Seiko (and her wardrobe malfunctions). Now that I think about it, that feisty girl up on stage was so enticing because unconsciously I had been seeing her as Mariko Goto or other eccentric beauties in other bands and Steve, the man behind Next Music From Tokyo, also thought the same when he saw her perform with her band not too long ago. 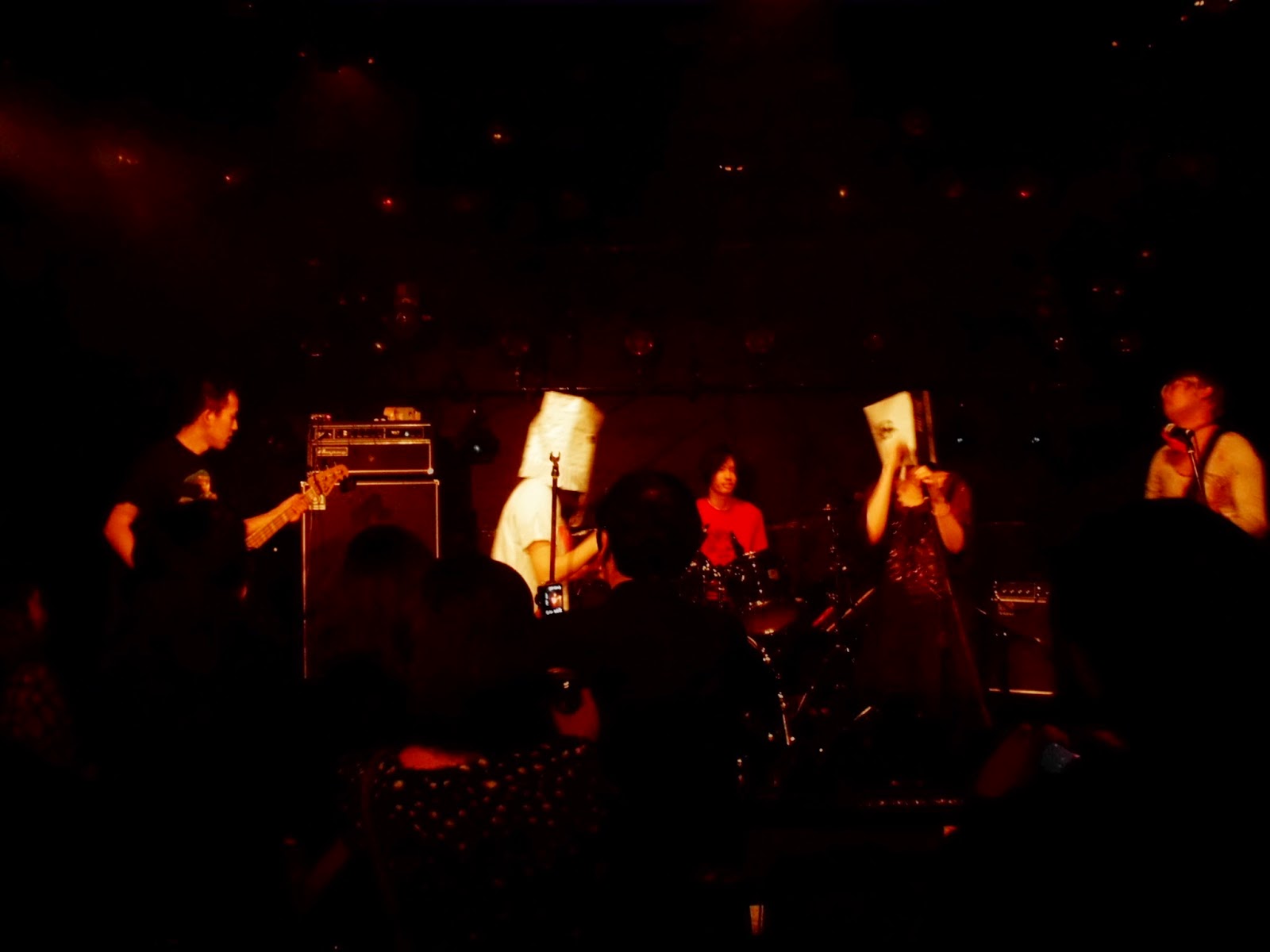 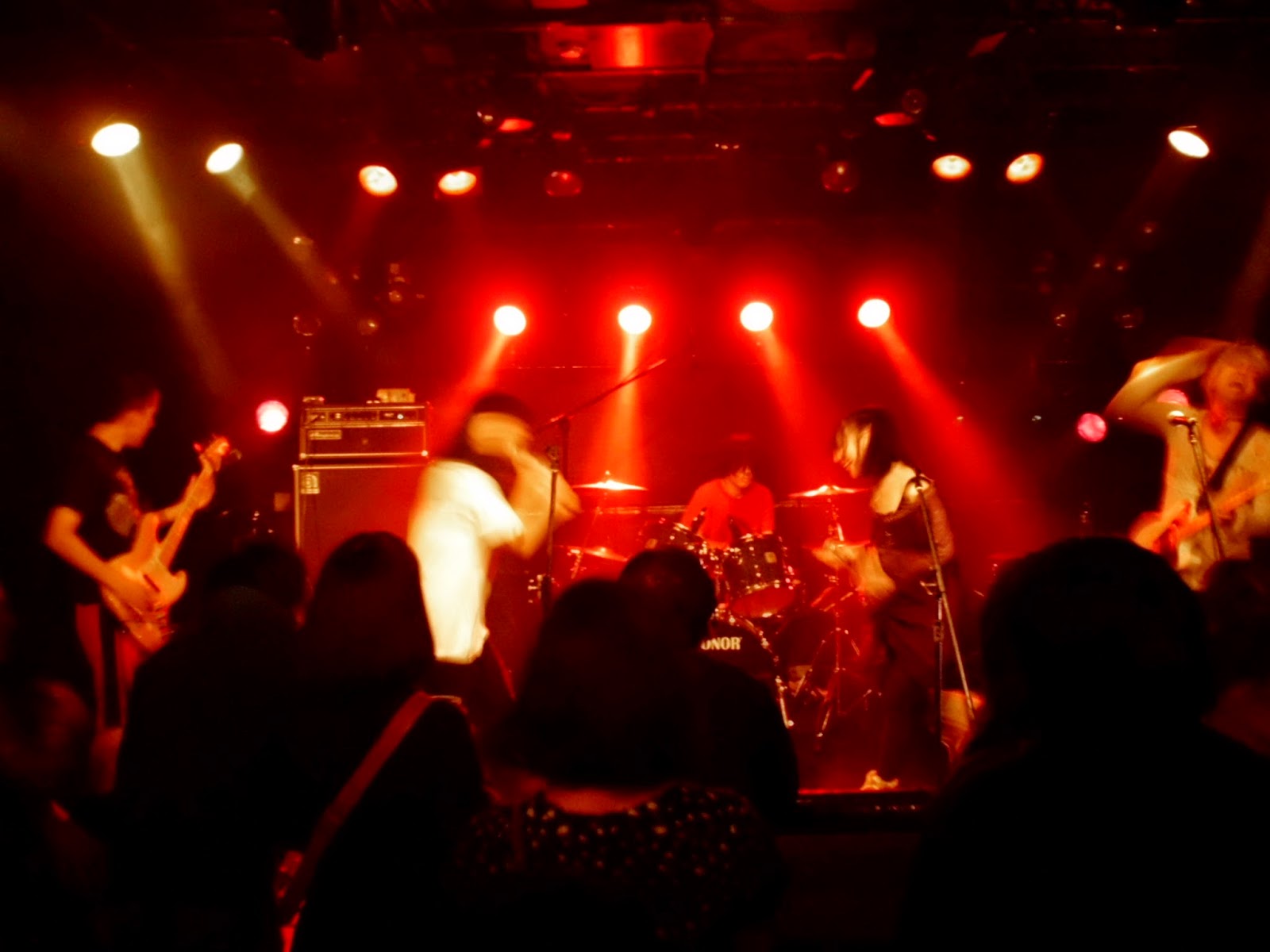 If the pictures are terrible it's not just because I didn't have an expensive camera: the frenzy of the live performance was just too insane to allow even a moment for anything to even focus, kind of like the terrible pictures I took of Sebastian X before. Anyways, that's Seiko under that paper bag, I swear! Check emily likes tennis' website!

I'd also like to apologize for the last entry I made about her in which I called her an "anti-idol," a word that, if I didn't coin or even help circulate, became stuck like glue to Seiko when people talk about her online. It's a loaded term that I coughed up at 4AM when I wrote that last piece about her some time ago because I was so enamored with the LaiLaiLai Team release and I think it demands further unpacking...next time, anyways.

I'll be glad to see where Seiko goes from here.
-
Chris/Hideki