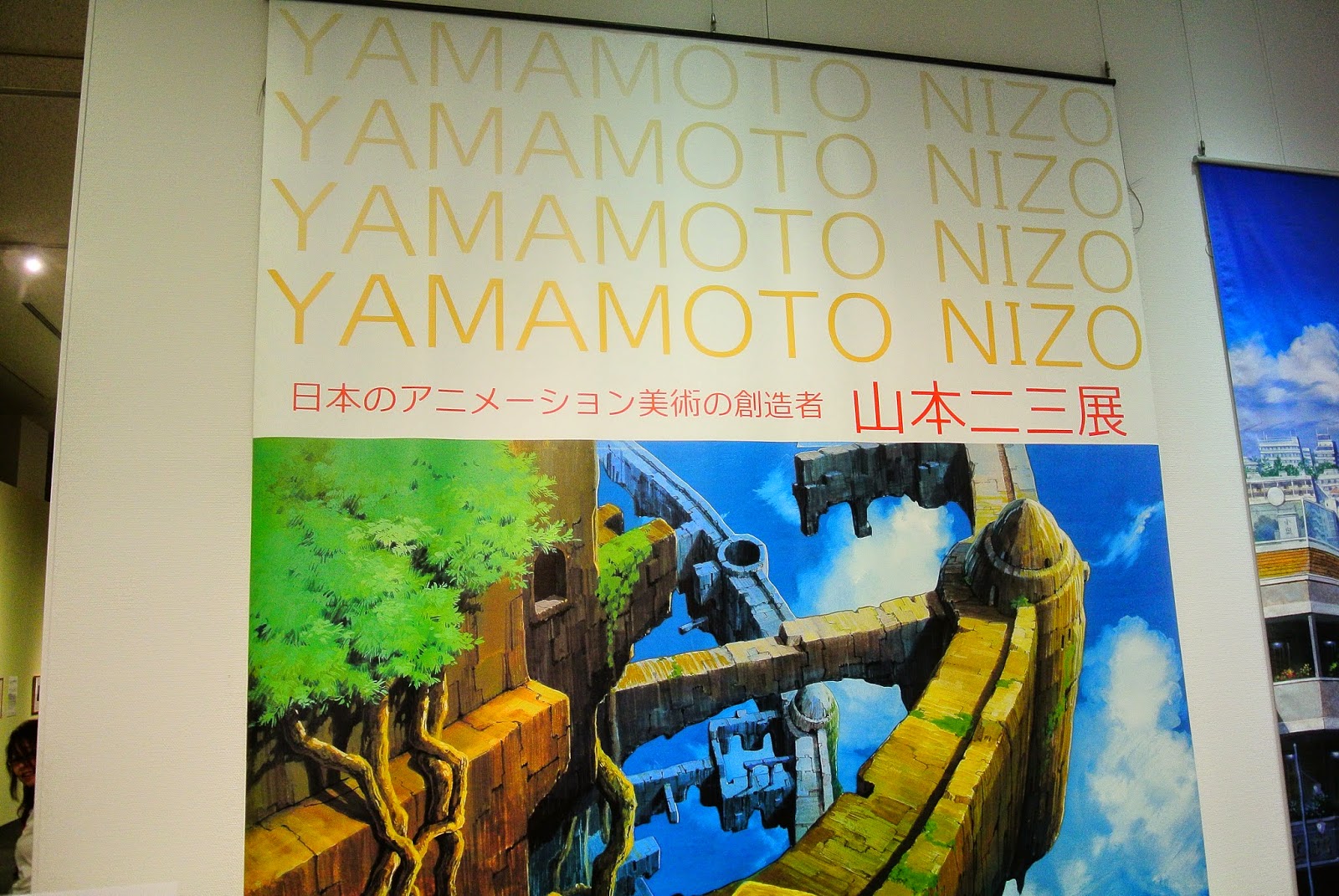 When I went to Japan in 2013, the one place I was set on going to was the Studio Ghibli Museum in Tokyo. I had tried to go on my last trip around New Years of 2013, but the museum was closed for the entire time I was in Tokyo. During this next trip in the summer, I had ample time in Tokyo and  had a good feeling I would have time to go. 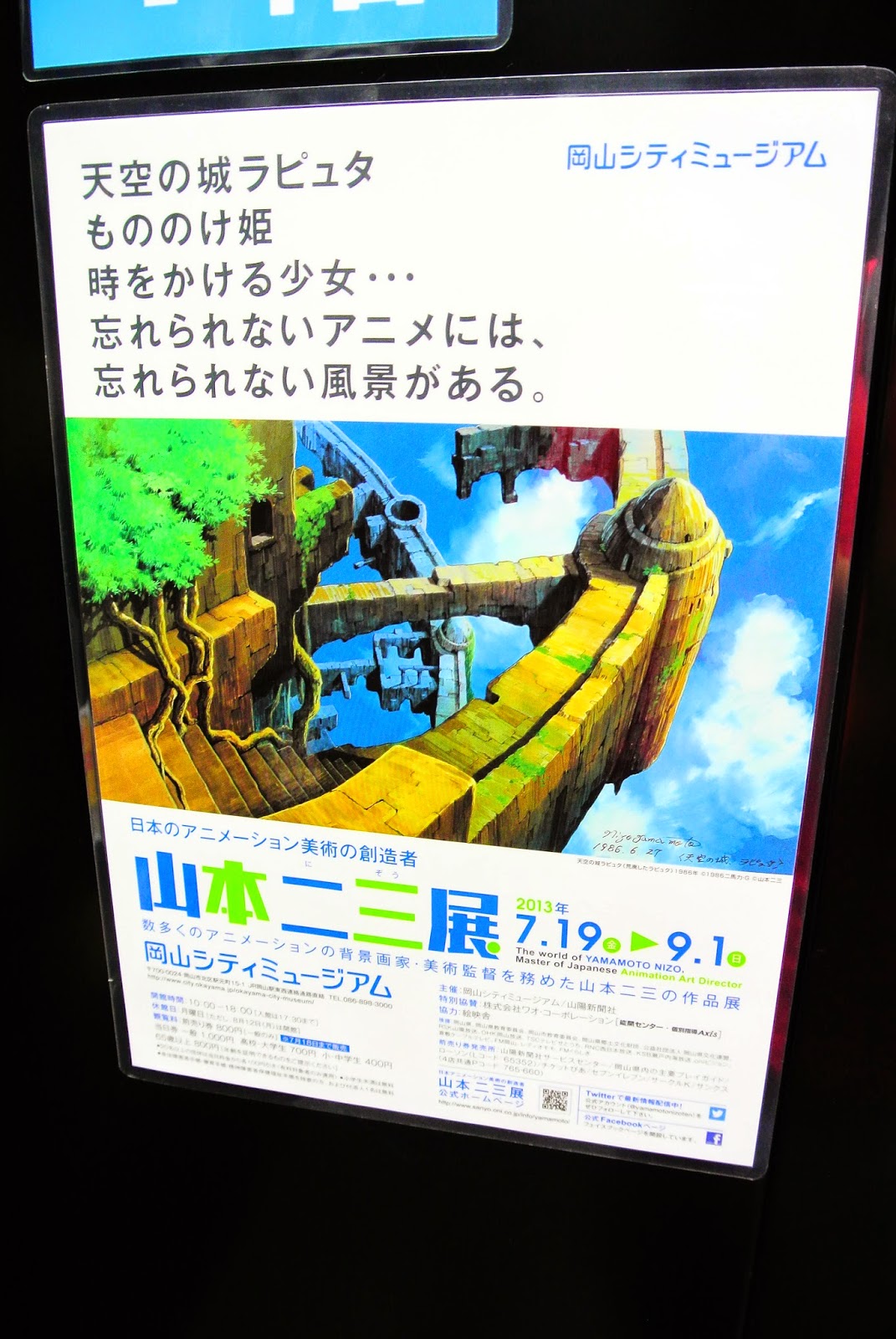 Unfortunately, a few hours after stepping off the plane in Osaka I went to a Lawson to get the tickets and after getting frustrated with the messages that kept popping up on the Loppi machine, I realized that the tickets were completely sold out for every single day I was trying to attend. It wasn't a great way to start a trip but thankfully there was still so much left on the itinerary that I would soon shelve the idea and focus on the exciting events ahead.

After a short stay in Osaka with my aunt, it was off by bus to Okayama. When I arrived, I noticed a sign up at the station with a scene from Miyazaki's Castle in the Sky that said "Okayama City Museum." I was only staying a day or so in Okayama at that time and already had plans, but I decided to look it up for when I would return after a few days in Tokyo for Comic Market. I did some research and found out that it was for someone named Yamamoto Nizo. I had no prior knowledge to who this person was but when I looked it up I discovered that he did a lot of artwork for Studio Ghibli's greatest film. The exhibit seemed perfectly timed with my visit and it was too good to pass up this opportunity to get to see some Ghibli artwork during the trip, especially after missing out on the Ghibli Museum. So since this was conveniently located a stone throw away from the station and would be so easy to get to, I decided to make it a priority on the evening of one of the days I would spend in Okayama following the Tokyo excursion.

The Okayama City Museum is located right outside the West exit of Okayama station - a simple one or two minute stride along a walkway that connects the station with the neighboring building. An elevator to the museum is just beyond a window of the local NHK office, which is decorated with Domo-kun and friends in full on Momotaro costumes. 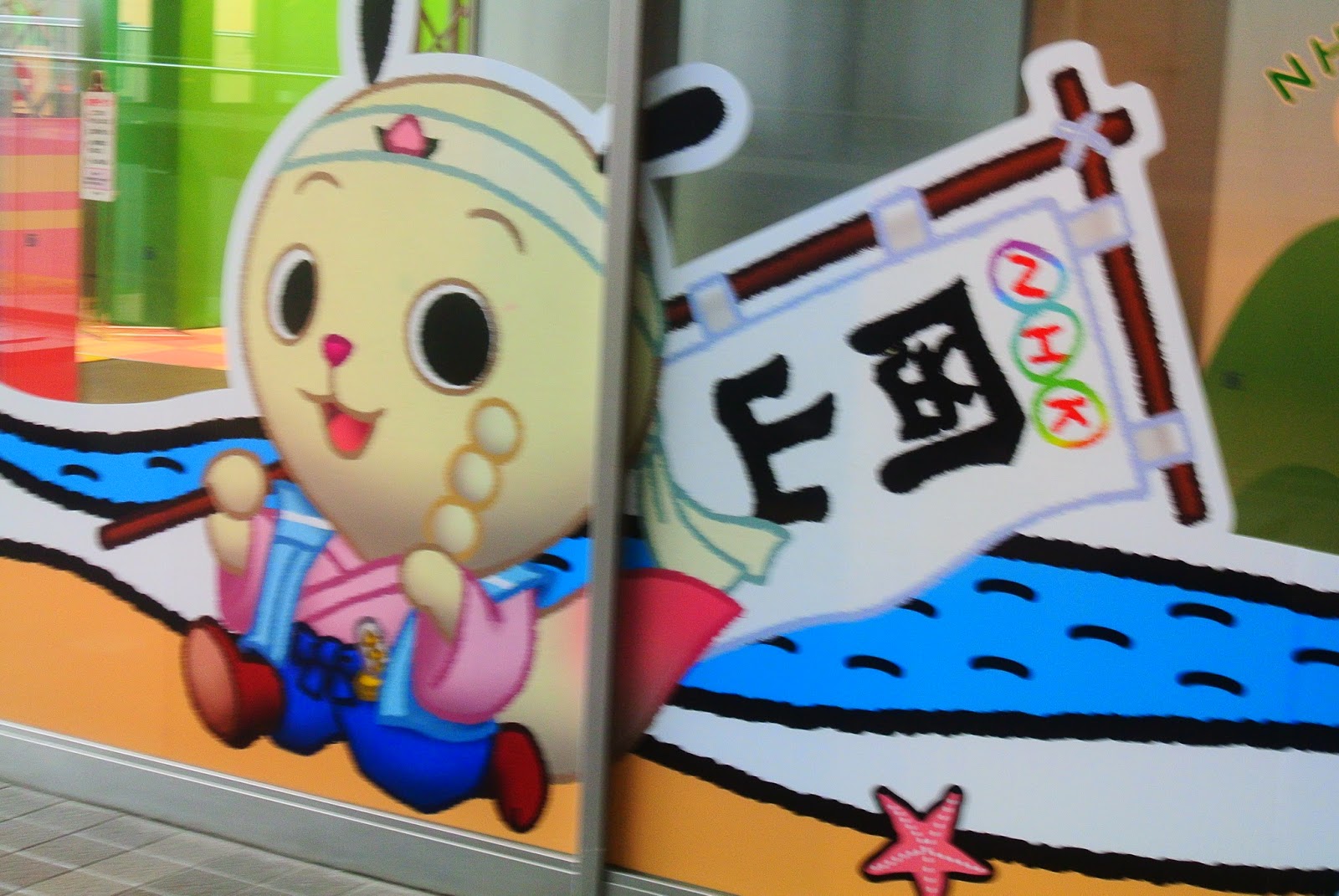 The City Museum was dead silent upon arrival with a couple other patrons purchasing tickets. At the start, the museum had a small explanation of how cel animation works and explained that Yamamoto had a big part in painting the background cels, while the characters would be in overlaying cels that moved in the foreground. To be honest, I had no idea this was how animation worked before seeing this simple explanation! It was quite informative. The rest of the exhibition comprised of these background cels that Nizo had done that were displayed chronologically on the walls. Sadly, because these were animation cels they were printed on pages that were about letter size and thus were very small when compared to museum art. Despite this, they were still very impressive and there was so much to go through. There was a good amount of people besides myself pinning through the work he had done on Ghibli's most well known films: Grave of the Fireflies, Castle in the Sky, Princess Mononoke and most recently the Mamoru Hosoda film The Girl Who Leapt through Time. He also did some pieces for more obscure films I had never heard of and some early works included a few backgrounds of Miyazaki's little-known(at least, in the West) animated series, Future Boy Conan. It's pretty amazing to think the man had a hand in all these films and some of their most iconic and picturesque scenes yet I had never heard of him until this day! 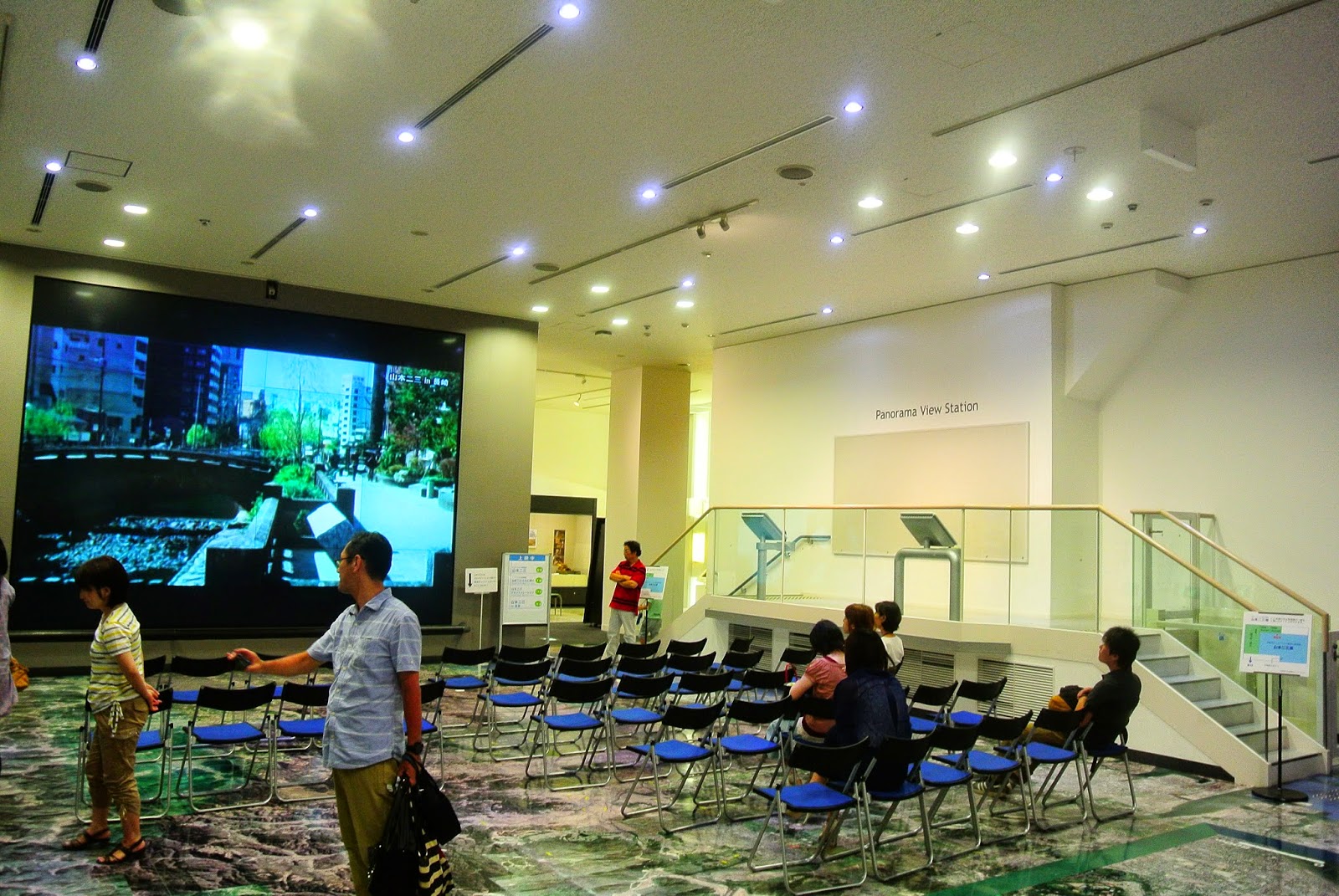 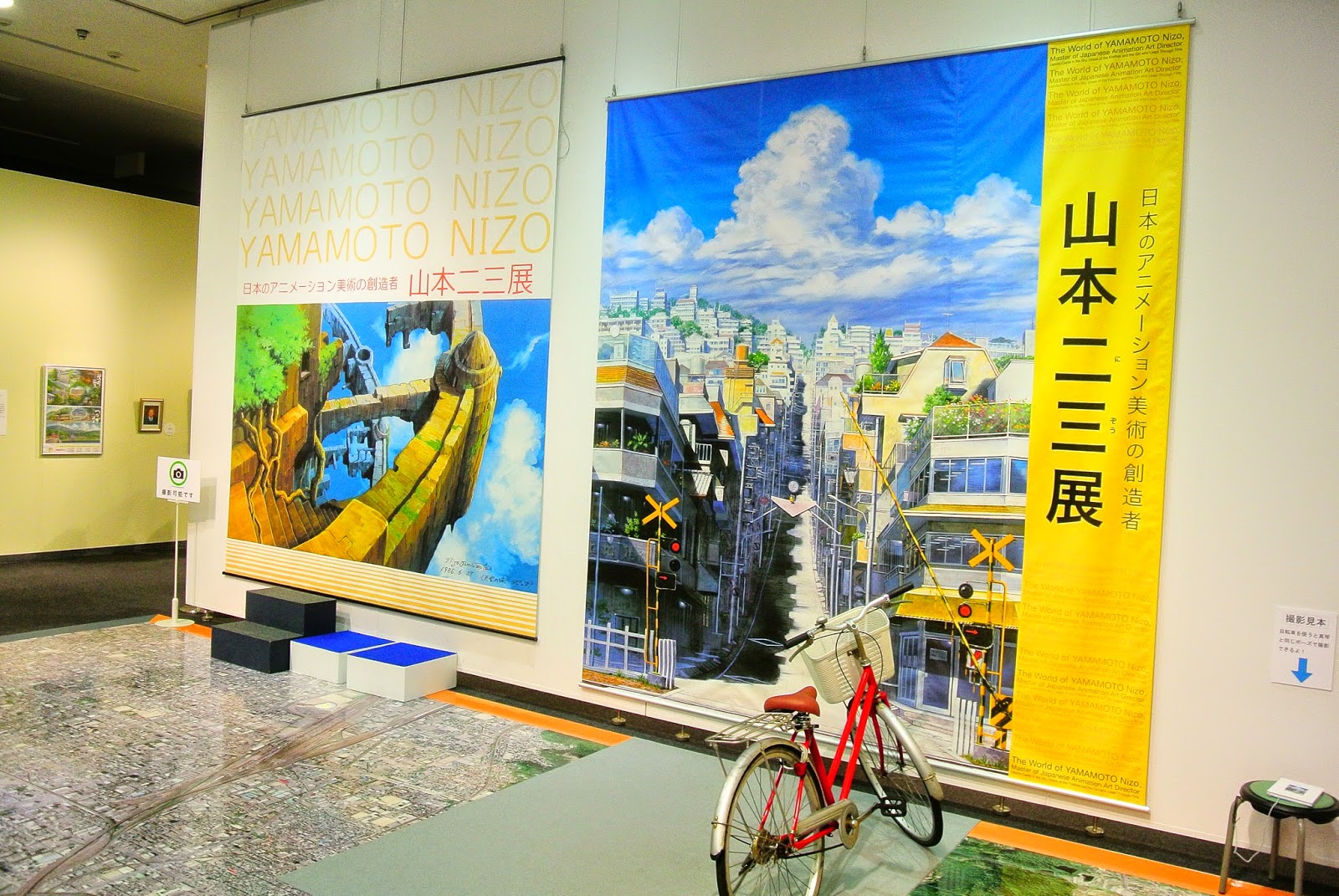 The exhibit also hosted a small viewing section for a short animated piece Yamamoto was involved with and at the end had an area set up to view a short interview/documentary of how he went about his work. Unfortunately I didn't see much of it (there were, sadly, no subtitles) but by this time I was working up an appetite and had spent a considerable amount of time combing through the artwork in the exhibit anyways. Besides, what was more exciting was the photo taking opportunity with some of Nizo's most famous backgrounds: the forest in Princess Mononoke and the town's slope in the climactic scenes from The Girl Who Leapt through Time, complete with a bike to pose with! 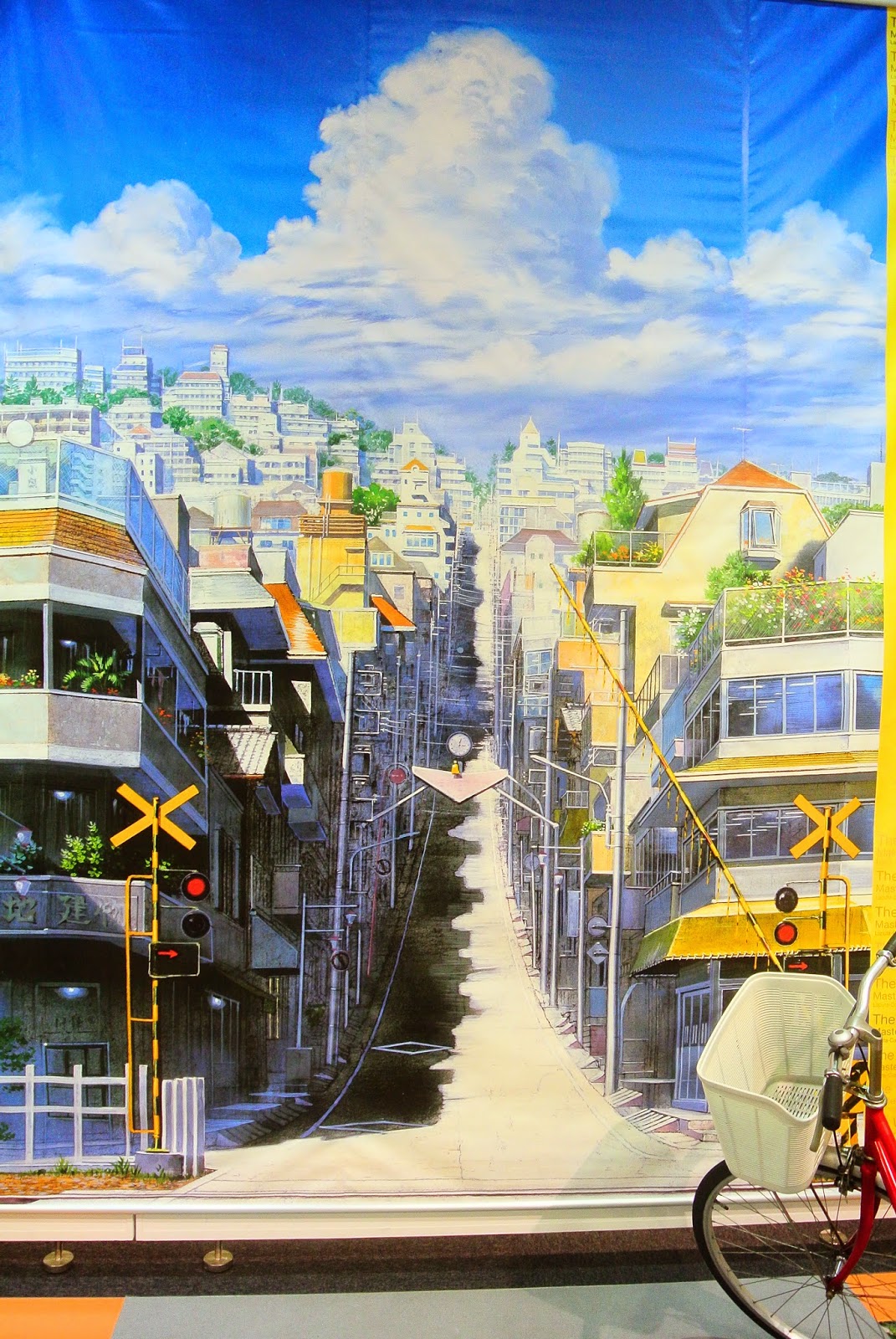 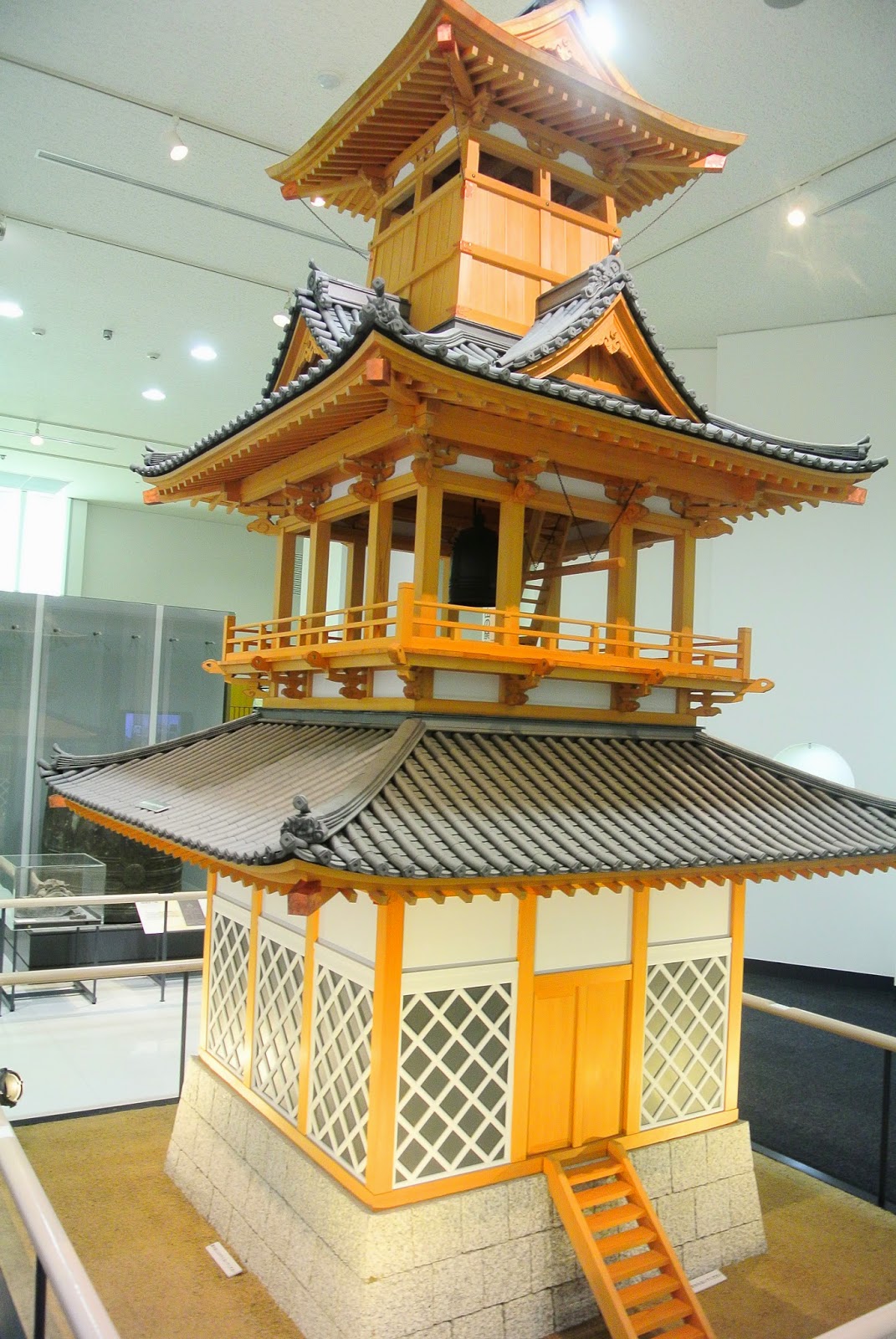 At the end of the exhibit was an array of goods lined up on the table related to the exhibition. They had post cards and various other prints of Yamamoto's work in all shapes and sizes, frames, and a book chronicling pretty much all the prints in the exhibition. I picked up the book considering it was a pretty good price (and encapsulated everything I had just seen) plus some of my favorite prints.

In addition, since this is the Okayama City museum there was a small, permanent exhibition at the end on Okayama city and its history.  There was a section about the Hadaka-matsuri at the Saidaiji temple, which is one of Okayama's biggest attractions for both Japanese and a large number of foreigners. 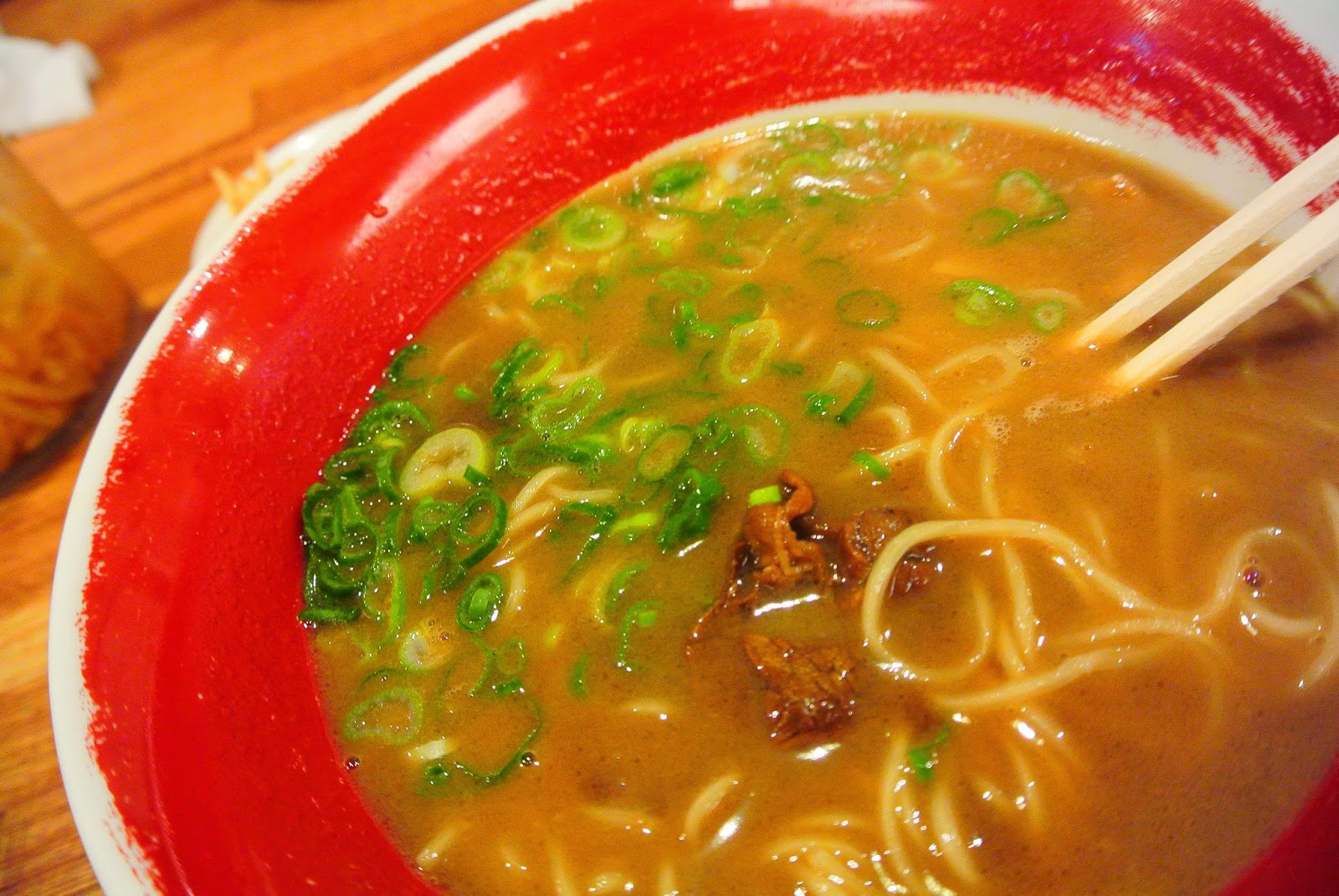 I had been hungry through the entire exhibition and now that it was over I absolutely had to get something to eat. On the opposite side of Okayama station, and not too far from the City Museum was a ramen place I used to frequent all the time when I was going to school in Okayama called Menou (麺王), which is located out of the East exit next to Bic Camera and along Momotaro-dori. It's a tiny placed sandwiched between two larger buildings that serves up a decent sized bowl of Tokushima-style ramen for a pretty good price(Tokushima is an island in Shikoku and also where Chatmonchy is from! Plus the Awa-odori festival...). If memory serves me correct, Tokushima soup is a deep color and just a little bit thick, but what makes it unique is the little bit of sweet flavor you get which I have a feeling is from miso added to the broth. It has a distinct flavor but isn't an acquired taste by any means. Besides the great location, the service is quick, they don't get too busy inside, you can add more noodles to your soup for just 100yen(kaedama, which is the best invention to come to ramen EVER), and there is an endless supply of spicy beansprouts at every table. Although this place is a chain-shop I highly recommend it if you're looking for something to eat right outside Okayama station: there are, I have to admit, a few local places that offer some good Ramen a little bit further away, but this one has to be the best in terms of location plus great value and flavor.

Overall it was a pretty good day with the exception of a failed expedition to Osaka that happened after this one. Still, I was happy to get to experience a little bit of Ghibli in some form during this trip and it definitely made up for me not getting to check out the Ghibli Museum. Maybe next time!

P.S. Eustacia Tan also posted her thoughts on the exhibition when it made its rounds to Fukuoka last summer, and got me inspired to post my own (dated) experience to my blog. Check it out here!