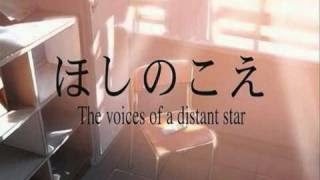 I've seen all of Makoto Shinkai's films with the exception of his very first, even though I had heard about his work since I saw Voices of a Distant Star when it first came out on DVD in the US. I remember seeing it among the DVDs in the Anime section of a shop here a long time ago and being intrigued by the cover: a girl sitting in a cockpit and a mecha gracing a gorgeous and haunting scene. I was even more intrigued when I heard that Shinkai had done the entire film on his own using just his Mac computer...more than the plot, which I never knew much about, this morsel of information has stuck with me even until now. Still, I never did pick up the DVD back then for reasons I can't recall, but I was finally able to get a hold of a copy just last month and it arrived not too long ago (and given that ADV shut down and the film is out of print, it's the same pressing that I saw in the stores back then. Kinda neat).


First off, I thought it wouldn't hurt to note that the title itself is a little bit misleading. I love the ring to "Voices of a Distant Star" but it's just a little bit different from the Japanese "Hoshi no Koe," which omits "distant": it becomes something like "Voices of a star" or "Voices from a star," in case anyone every wondered.

Shinkai has always excelled in the backgrounds department, blending the picturesque everyday environments of a small Japanese town's side walks, alleyways, train crossings, into the fabric of his sentimental narratives. Seeing him use these techniques had me recalling all of his future films and how far he has come since then in his utilization of backgrounds in his work. It's really something to see these early incarnations of what would become 5 Centimeters per Second, Garden of Words, and his other films. His character designs are decent but sometimes the movement was a bit choppy and the CGI may not have aged when juxtaposed with today's quality, but I found myself forgiving Shinkai for these given that the work was done by him alone and appeared more than a decade ago. In that respect, it must have been much more visually enticing when it originally debuted.

Since this film, Shinkai has delved into similar thematic territory by combining his knack for sentimentality, alienation, and the distance between two hearts with science fiction, mecha, and the future in works like The Placed Promised in Our Early Days and The Children Who Chase Lost Voices, but this remains the best blend of the to even when standing up to the updated visuals and experience in storytelling he supposedly gained for these more recent projects. Perhaps it is because, like the two other great Makoto Shinkai films, it's extremely condensed and only runs for 25 minutes. Perhaps its not that Shinkai is, as I once felt, terrible at fantasy and much better equipped to do sentimental animated films as long as they left out the sci-fi, but that the director merely excels and delivering his ultimatum in a short span of time rather than dragging it out. This film is proof that Shinkai can have an intriguing film set among mecha, war, and the like; the aforementioned two I felt were very weak and dragged on way too long despite them and the rest of his work have a constantly fantastic visual agenda. Despite the dated animation, the story itself is one that still has the ability to resonate with audiences in a way similar to 5 Centimeters Per Second and Garden of Words, two of his best films.

As an almost aside, one thought provoking part of seeing the film was actually not from the film itself but from an extra interview with Shinkai that was part of the bonus features. The director talked about his self-production of the film and how technology had now made it possible for animation, something usually done by a team(eg. multiple people), to be produced and created by just one person. Thus, Shinkai producing the film alone made the animation something extremely personal, perhaps the first of its kind. More than anything, he wanted animation to be the blood and tears of a single person, something created by a single individual, just like music, novels, or even manga. He was really doing something quite ahead of his time and this ideas were interesting to consider, especially nowadays when we take technology and all of what it lets us do for granted. I have personally never thought of animation from that kind of standpoint before: it is certainly a process mostly thought of as being worked on by many people especially when compared to other forms of expression. At the same time, music is often worked on by sound engineers and people in the record company after it's been passed around between quite a few band members and novels might be influenced by editors as well. Manga is certainly a product of things like editors and assistants and video games are a similarly gargantuan undertaking that usually conjures up images of a team. There are exceptions of course, mostly being things that are very amateur in nature, like self made, independent recordings by singer-songwriters or  dojinshi for manga. I still Shinkai had a unique vision but in the end I'm sure that it is simple practicality that will trump the process. I'm sure his recent films, both lengthier than this one and also utilizing much more advanced graphics and animation techniques, could not have been done alone even if he wanted it to be a personal project. The concept, though, is thought provoking.


If you're a Makoto Shinkai fan you owe it to yourself to see the film that started his career if you, like me, have yet to do so. Its thematic approach to love in time and space is stands the test of time even more than a decade after it was first released even if the animation does not age in a similar fashion. This definitely ranks it among his best films despite the fact that those works omit fantasy and science fiction. It serves as proof that Shinkai needs more time to further perfect his blending of the two genres. Furthermore,  it is also interesting the sense of it being "personal" animation and it being the undertaking of a one man is both inspirational and admirable. Although it is out of print in the US I'm sure it can be seen readily on the internet somewhere.

It's also important to note that his very first film, "She and Her Cat" is also included on the DVD (and can similarly be seen on the internet, I'm sure). It's also a "personal" project by Shinkai for which he won a few awards and attention, which I am sure is what caused him to pursue animation seriously in the first place. It's also worth a watch despite being about 5 minutes in length.

Lastly, TokyoPop released a manga of the same name available in English which is just as poignant as the film and drawn in a style that matches the melancholy quite well. It's a quick read at just one volume.