Singer/songwriter/anti-idol Oomori Seiko(大森靖子) just released an album with backing band rai rai rai team(来来来チーム). I've never heard of these guys before (they played a show with H Mountains though, a side project of the now on hiatus Far France) but I have been following Oomori Seiko since I saw her this year tear up the stage alongside the vocalist of otori with the backing of emily likes tennis. Besides being extremely cute the huge winner for me was that she was in a frenzy screaming into the mic at the top of her lungs the entire time and the show was absolutely NUTS.

I later found out she did her own singer/songwriter type of thing on the side but honestly, that sort of thing does not sit too well with me. Besides not being totally fluent in Japanese, music for me has to be extremely moving and crafted by nothing short of genius to move me if it's just going to be a vocalist and a guitar. Naturally, the samples of her music that I heard weren't all that impressive... 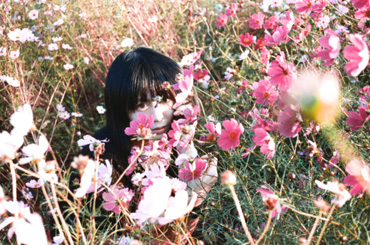 However, Oomori Seiko was also really interesting because she was trying to sell herself as a kind of anti-idol. This aspect got me to pay attention to her. She would always dress up in strange but cute outfits onstage and making a ton of cute pictures of herself with sparkles and all on her twitter and website. She was trying to amass a sort of fan cult for herself just like an idol would: except she was a singer song writer who wrote about some pretty dark stuff and had a quirky voice that definitely wasn't the auto-tuned or overly high pitched standard run of the mill idol voice. She wrote her own songs and was involved in the indepednent music scene but was also fronting the image of an idol - the type of music with ideologies almost completely opposite of what independent singer-songwriter is supposed to be...at least to me anyways. God knows how wrong I am about it. The point is: she does a great job of not just focusing on her music but also on exaggerating her looks. And also posting photos where half her shirt is missing...and in the background is a really cool figure of Asuka from Evangelion that I WISH I had. Oooh. 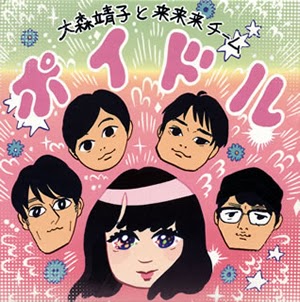 This collab with Rai rai rai Team just made her stuff most listenable! Fantastic musicianship. It's the exact kind of quirky indie rock that I've been missing for so long with her at the vocal helms. She isn't as wacky as when I saw her freaking out in the New Year's performance but her vocals are actually really great at this semi-neutral range which sounds a lot like E-chan from Chatmonchy at times. As I said, the band plays clever indie rock with the twangy and jazzy guitars dueling it out making some quirky melodies while the rhythm section holds down the fort. A lot of the weird Tokyo New Wave people come to mind, specifically those dudes Siamese Cats(シャムキャッツ) but if they didn't listen to so much Quruli and experimented more. Probably a lot of other comparisons I could make if I hadn't lost touch with this kind of sound and forgot who all the great bands were. Some great dual vocal harmonies between Seiko and the lead of Rai Rai Rai Team. The album hasn't felt dull for a moment. Somehow I kept thinking the next song would surely be the last good one and they would just ruin this great formula they have but no, the album is about done and everything's been great so far. Definitely gonna get my hands on this one! As for her other solo-stuff...not entirely sure my mind's made up about those yet.

OH. Forgot to mention the absolute coolest part about Oomori Seiko is that her website used to  have a great background image of her in a field at dusk or during twilight and I am so sure it was a nod to All About Lily Chou-chou. She certainly isn't as dark and depressing as that film was, though, but I thought it fit her persona of being a deviant in the industry perfectly.