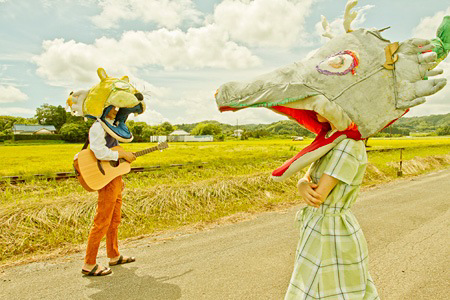 Mitsu, a one character-word, simply translates to honey or nectar in English. At first glance the name is deceptively simple at just one character long but that's what Mitsu wants you to think. Taking a look at the duo might warrant a similar comparison: they might just like a simple singer-songwriter couple that sound like everyone else. But Mitsu is out there to turn all of this upside down.

I've mentioned Mitsu at least once or twice before. I saw them first perform alongside Tokyo Karan Koron and YeYe in Osaka, at Tennoji Fireloop. Then, I saw them perform outdoors in a small "stage" at Commin Kobe. Mentioning they had CDs with them, I was incredibly determined to acquire them this time in Kobe, but sadly the band was nowhere to be found after the set.

This was all remedied months later when the two announced they would be releasing their first official CD to be sold in record shops everywhere. Their sound was so incredible I couldn't have hoped for anything better for the duo than for their music to reach a wider audience and finally escape the clubs and live houses of the Kansai area. 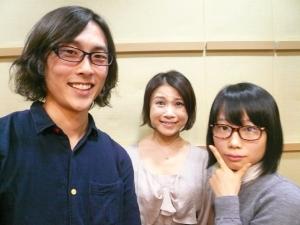 Listening to Ikutsuka no Koi, I wasn't fretting on how their other songs would sound nor did I receive that jolt when you hear a band's record for the first time after only hearing good things about them. There was not much "new". On the contrary, most of these tracks I had heard before, most likely from seeing the band a few times live. The melodies had all been stored subconsciously by my mind and were all coming back to me as the songs played. More than anything it was nostalgic. The album helped me remember my time in Japan and the early months when I was still wondering what to expect out of the student exchange. The show I saw them play in Osaka was one of my first days there, and the latter show I saw them play in Kobe was my first festival experience and one of my most memorable(and ambitious) excursions I took during my time as an exchange student. Mitsu was the background music to these memories.

It's easy to look at the image on their CD and write them off as just another indie/folk/pop/ singer-songwriter but Mitsu exists way above that spectrum.
The band's strongest point is their stage performance. As a singer songwriter wielding an acoustic guitar, it's hard to leave a lasting impression in stage antics on your own when your on stage alone. Even when there is a guitar player and a vocalist, they usually restrain themselves and often sit side by side on stage without moving from the confines of this imaginary box. 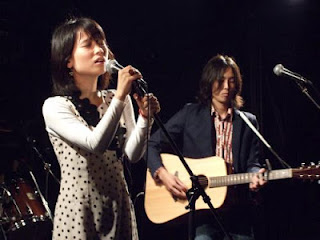 For Uni Kimura, who lends most of the vocals and sometimes pianica to Mitsu, there doesn't seem to be a boundary at all. Throughout the performance you can find her crooning on the microphone aside guitarist and vocalist Ryuo Hachizume, literally leaping across the expanse of the stage, dancing like no one's watching, and constantly getting the audience worked up. Her eccentric personality and adorable looks give Mitsu a lot of charm. Ryou, the other half of Mitsu, is always at work on the acoustic guitar. For a one man act, he puts the instrument to its best use and strums away chords that blend styles as varied as Uni's stage antics. There are the soft, beautiful melodies but at the same time the off the wall, fun, and almost comical Odoridasenai lady. Even on the recordings, Uni's antics for going all out on vocals, switching tones and styles at the snap of a finger, translate well and hint at how entertaining the group is to see live. Yet their compositions are simply made up of the acoustic guitar, vocals, and a few other instruments, making the transition to CD surprisingly smooth, too. 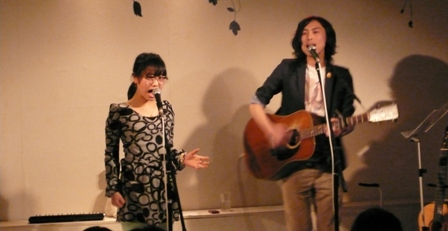 After rapidly putting out two consecutive EPs, the duo is now riding on the curtails of their major debut with record label Toshiba Emi and seeing even more success then before with concerts across the country headlining their own events as well as sharing the stage with others in the scene. Hopefully all goes good for the two in the near future!
[Official Site] [Youtube]


You can order some of Mitsu's releases on CDJapan: