Next Music From Tokyo vol.4 coming to Canada this May!

Next Music from Tokyo is a series of tours in Canada which is arranged by an awesome guy named Steve hell bent on showing North American audiences the raw talent, determination, and dedication that makes up the fantastic collective of artists in the Tokyo underground music scene. The tour exists on a grass-roots level and is funded by Steve himself with promotion being done by the fans that love the bands and word of mouth. This is the fourth installment and Steve has not stopped for anything to make each installment bigger and better than the next.

Our roundup this time includes: Zazen Boys, group_inou, Charan-Po Rantan, and Praha Depart. Rather than focusing on purely one genre of music, the artists(handpicked by Steve himself), are instead from all sorts of musical backgrounds: from the funky, new-wave meets mathrock jam sessions of Zazen Boys to the explosively powerful rock sound of Praha depart, the listener is not given a narrow minded perspective from which to judge the music scene of Tokyo but instead given a huge soundscape to give them a more complete knowledge of the diversity and talent in the scene.
But what the artists lack in uniformity of their sound they make up for in a general consensus of ideas. Each group, from those that play in the smallest clubs as opening acts to those that have packed the larger halls in cities from north to south, all exhibit a dedication to the art and unique perspective of music common to most of those that float on in the never ending sea of musicians in Tokyo. In a city with a live scene that is pay to play(and an exorbitant fee, at that) and is as wide as godzilla's terror rampant, many bands fade into existence without so much as a swan-song concert: left desolated by the pressures of society to conform to normality and burdened enough with everyday life, the lack of hope for any success related to music is what brings a lot of artists to throw in the towel.

The artists Steve and so many others try diligently to support are original and will blow you off your feet. They dedicate themselves wholly to their music without any second opinions because it is what they love to do, despite the many downsides of playing music.

Zazen Boys needs no introduction to anyone familiar with Japanese indie music. Mukai Shutoku, the boys' frontman, is a veteran of the scene who has made huge waves with his first group, Number Girl, in the '90s. Zazen Boys is more of this man's brainchild than the last group and breaks down the boundaries of genres in the flash of an eye. Recently, Mukai has been delving in new wave and electronic music that have taken on new light when channel through his creative conscious. The band is also keen on math-rock, with exceptionally tight sessions that leave the audience in awe every time. To see the man responsible behind propelling indie rock make his appearance in Canada this May as one of the headlining artists of this tour is a treat everyone will enjoy.

group_inou is a duo that exists in another realm of the musical spectrum, but perhaps not entirely. Although it's easy to slap on the hip hop label to these guys it's also just as easy to replace it with something else. The beats are influenced by electronic music and video game chiptune so much more than anything releated to orthodox hip-hop. Their live performances are also legendary for cp's crazy live antics, getting into manic frenzies while grasping tightly to his mic  and running about the stage.

チャラン・ポ・ランタン is a new comer to the Japanese music scene: a duo consisting of sisters Momo on vocals and Koharu on accordion. The girls are simple duo of accordion and vocals: but simple is a deceptive word and might befit them if every band in Tokyo had an accordion player. The Showa-era type of music musters up sounds of an old age, something that may have come before but still has an honest, youthful touch to it because it's so fresh and original when it comes to our ears. There is no doubt that this young, adorable, duo will charm the audiences of Canada with their unique take on music. 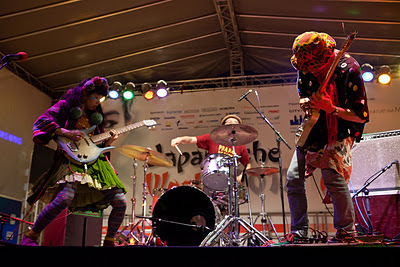 Last but not least, is Praha Depart. If their name looks familiar you may have seen them live already: they've been to Europe and America recently, vigorously expanding their reputation as a powerful live act to be reckoned with in unfamiliar terrain. Praha Depart tread overseas where many bands do not. But their hoenst dedication and the raw energy in their live performances is enough to convince anyone that these guys mean business, and that because of how well they have been received that music from an ocean away can indeed reach the ears of the global populace through fantastic quality live performances: and that is just what Next Music from Tokyo is about.

No matter what date you choose or how many miles you drive to see these bands, you will never leave with anything but a great impression. This isn't about a funky, new, gimmicky Japanese band that plays anime theme songs. This is the raw sound of it sounds like in the clubs back in Tokyo. Don't miss it for the world: I know I wouldn't if I lived anywhere near Canada!