You can see a lot of well known artists in Tokyo on any given night. Since most famous musicians are based in the capital, you have well known artists share the stage often. I admit I've always wanted to see one of those "dream concerts", with a lot of bands I enjoy listening to in one amazing lineup.
In smaller prefectures, this type of show hardly comes by. Most well known acts play one-man shows or they tour individually, so usually they play sets with smaller local acts instead of sharing the bill with their counterparts.

I saw that Lite would be stopping by Okayama on their album release tour with avengers in sci-fi and De De Mouse, so I was really excited that I could see all three on one bill. It also helps that I'm not a really big fan of any of them; it would be too much of a stretch to see them play one-man shows here or even with other local acts. Seeing all three of them was just enough of what I needed. The show was also at the end of my stay in Okayama, so it was one thing I looked forward to attending before I left.

Re-zen was the local opening act that night. I've said so many good things about these guys, and they tore up the packed live house despite the fact that the audience was too stiff to even warrant a good round of applause after their songs. I was probably the only one cheering for these guys the whole time and the only one who was open to their set. It was really sad that these hipster kids couldn't even give a chance to a band trying to make it from their own hometown. On the positive, I think this was the set where the keyboardist struck the keys so hard the keyboard flew to the floor at the end of the set and the whole band got a pretty good laugh at her enthusiasm. 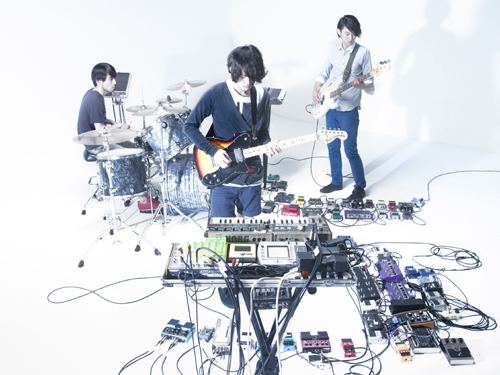 avenger's in sci-fi had a really cool concept for their music, basing a lot of it off of astronomical terms and borrowing electronics and elements of shoegaze to give their music a "sci-fi" sound. In recent years, though, they've been geared more towards dance-rock than shoegaze, giving up their more distortion filled songs for the tired but catchy eight-beats. Still, I was familiar with most of the material they played ranging from even their first release. It was a sort of "best of" setlist, and like I said, perfect for someone like me that wasn't a devoted fan but was familiar with their material. They were pretty okay live, the fans loved them, but they need to cut down on the image they've built for themselves. Seriously, I REALLY doubt they utilized EVERYTHING in their effect pedal repertoire and it just took so much extra time for them to set up beforehand.

I passed on Yasutaka Nakata's club event held in Okayama because, well, I had never been to a DJ type event before and wasn't sure if I would enjoy it(hell, it's Nakata! how would I not! ...is what I thought after realizing I SHOULD have went). I didn't research much into De De Mouse, though I knew a little bit about him, seeing his name here and there and so forth. It was interesting when the stage at Pepperland was dismantled and a board was placed on two amplifiers in the middle of the stage. It was, for once, stripped almost bare. A timid, but serious, looking man came up and set up a mac on top; when the lights went out the only thing visible was the apple logo shining in the dark room. 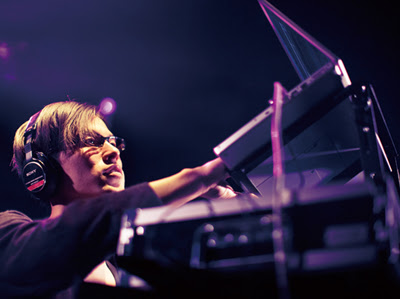 The strobe lights weaved neon green and red around the room amidst the pitch darkness as De De Mouse started the music. The atmosphere was perfect and I felt lost amidst the lights and sounds, the pulsating beat filling the small club to its brim, transforming Pepperland into something otherworldly, if just for the brief time he was on stage. People all around me were dancing and getting really into the beats, and so was I. Sons strewn together through a common bassline. It's difficult to describe his style because his studio recordings differ so drastically from his live sets and youtube doesn't host anything done live by him in quality worthy of what he creates. Definitely going to try to see him, or another DJ set again, as this turned out to be one of the most memorable sets I saw in Okayama. 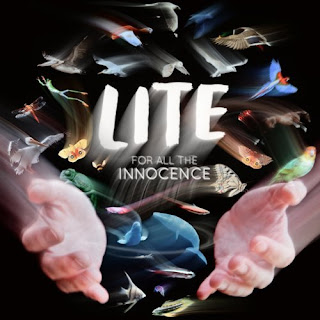 Lite closed the event that night, being the headliners. For those unfamiliar with Lite's musical history, they started off as an instrumental post-rock band, in the same vein as te' and the like, but then drastically changed their sound to accommodate electronics, which became almost central to their music. Perhaps "changed" isn't the word, but maybe "evolved" is a better one: the band hasn't succumbed to auto tune or something that extreme, but they do play off of a lot of electronics in their songs while still retaining that instrumental edge that made them so fierce. I briefly listened to their new album before seeing them tonight and recognized a few songs off of it that they played that night.
The highlight was definitely seeing "Pirate and Parakeets" from the new album performed live. The only LITE song with vocals and a standout on the album. By vocals, it's not exactly "singing" but the inclusion of a chorus type of chant, "oh oh oh". The three boys from avengers in sci-fi came up on stage for this number and did the vocals, which was really cool, and they seemed to have a lot of fun with it.
The four guys of LITE were really cool, and way too modest. Their instrumental numbers are strewn with odd time signature changes and stops but they took this flawlessly and, furthermore, effortlessly, but never made it a point to be showy about their skills. The electronic effects rampant in their songs were also done well live, with the lead guitarists handling a computer amidst guitar work. They are definitely commendable, and their set was way over the top.

The night was a lot of fun and I had a blast finally seeing avengers in sci-fi while at the same time, experiencing something completely new and instilling in me a new interest of DJ sets by De De Mouse. Finally, Lite's musical prowess left me in awe and with new respect for the instrumental math rock type acts since I hadn't seen them live before. Re-zen were fantastic as well, as always, and this would be one of the last times I see them. Great chance to see an amazing lineup before I left Okayama that left me with a great lasting impression.