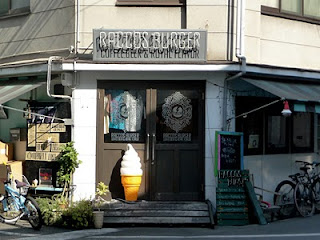 While I was in Okayama, a friend of mine mentioned to me about the sen-yen($12) burger his friends were talking about. It was supposed to be this huge burger offered at some secret restaurant for a limited time. I had been in Japan for awhile and the closest thing to a "legit" burger I had eaten was a big mac. I needed some help, and this place was gonna help me.
I'm not sure how, but I'm thinking it was when I mentioned it to a friend of mine the only burger place he could think of was a place called Racco's Burger. It wasn't until a couple months later that I finally ended up getting around to looking up the place, getting directions, and taking a friend and a bike with me there(the sen-yen burger place, however, ended up not being Raccos in the end, but who cares).

I'm getting hungry just typing this out, but before I even go on to the burgers let me explain what makes Raccos burger such a cool place.
"Racco" isn't short for raccoon or anything like that: it's the name of the singer of thrash punk legends and veterans of the scene, Idol Punch. See the guy in the long hair? That's Racco when he's not behind the grill at Raccos Burger(which is not frequently, since this IS his main "gig"!) 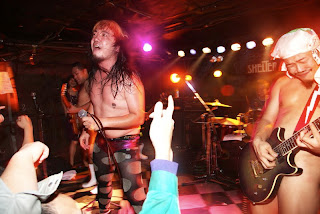 It's gotten a lot of rave recently, and I guess some people didn't believe that this guy was really a singer or famous or anything. But I ended up one day spotting his picture in a record store magazine thing since he was selling burgers at FUJI Rock Festival, amidst a whole bunch of other huge events this year.
Knowing that someone really cool was running not just a restaurant, but a place that claimed to
sell legit burgers in Okayama had me determined as fuck to check out the place. 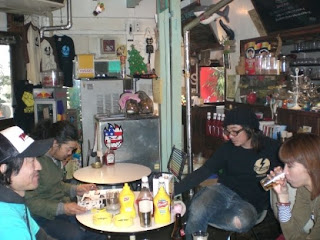 First off, Raccos is just a really cool place to hang out(I remember it being 10x more interesting than this picture I found of the interior. Trust me!). I loved the vibe there. Then again, what would you expect from a singer of a punk rock band? Of course, the place has a ton of CDs everywhere, posters from different gigs that Idol Punch has done, fliers, T-shirts, skateboards, Girls Generations albums, really cool memorabilia, stacks of manga that I'd actually read, etc. It's really small though, so I wouldn't recommend coming in here with a huge crowd, and i could barely sit at the tables! It's still a really cool set up that looks like a punk rockers room turned into a burger joint: which is probably what Raccos Burger is.

And so, finally: the food. Racco's is about burgers and that's kind of all I remember the menu having. I just want to voice that it was nearly impossible to find a place selling a 100% authentic american-style, greasy, heart-clogging hamburger in Japan, and whatever they had, as long as it was a burger, I would have been happy. But no, Raccos burger isn't just an ordinary classic burger joint. I was surprised to find a plethora of choices ranging from the Shrimp Salad Burger(Fried shrimp, potato salad, bacon and tomato sauce), the classic Raccos Cheeseburger(The basic toppings, plus avocado), the way out there Spam Burger(Spam, Egg, Cabbage, Tomato), and the "very Japanese" Mt. Fuji Burger(Wagyuu beef with teriyaki, fried lotus root, and a sunny side up egg). (You can take a look at the whole menu over on the top page of the Raccos Burger homepage for all the menu items)
Oh...me? I got the Chili Cheeseburger(the other one picture is the classic Raccos): 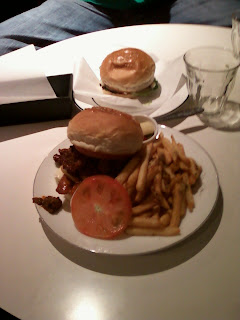 Alright, so I'm not a great photographer. Here's a picture from someone called the Hamburger Street Blog that's just a tad bit more mouth watering than my photo: 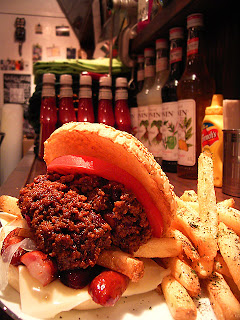 The burgers were still on the small side to me, though, but man were they good. It had been a long time since I had anything close to a burger but that wasn't the only reason I enjoyed them: these were really good burgers compared to anything. All of the stuff is homemade, if I haven't mentioned that already; Raccos isn't some chain that mass produces crap that somehow passes as edible. These are great original culinary creations made by a really cool, hardworking frontman of an underground punk rock group. I wish I could've went back to try 'em all.

Most importantly though, in Japan I was a poor college student and Mr. Racco wasn't out to steal all my money. All of the burgers are 500yen(ok, the site mentions that one is, gasp, 650), and topping can be added on for not much more, but when you have combinations this irresistible why would you even think of that? You can add fries for 250 more yen(which tasted great, too, since I love french fries) and he has a couple of different discounts for entire sets with drinks, too. It's unbelievable how wallet friendly this place is, especially compared to other non-chain restaurants which usually end up being pricey. It tastes good and its incredibly affordable. Awesome...YES. 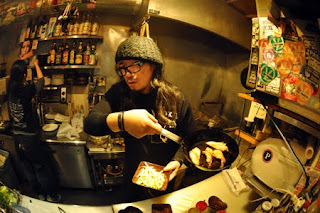 Racco's is open most of the time but is closed whenever the man has things to do, namely, this summer he was closed often since Racco's has been showing up at music festivals a lot, selling his signature burgers. If you're in town, Okayama, that is, try to stop by sometime, probably a 15 minute walk from the station directly south of the OPA building(tower records). It was definitely one of my more memorable food experiences in Japan, Okayama particularly, in a country infested with crappy mass produced chain food. Be sure to check it out!

Official Site - Be sure to check it out for schedule(when they open/close for events)/menu/etc.!