I guess it's funny how I can write about how I traveled on a bullet train, stayed a night alone in a middle of nowhere hotel and then proceeded to book it back to the my hotel in Tokyo(costing a lot of money) just to see Shachi perform on the 18th at Nagoya Apollo Theater. I had no concert plans for the next day until i read a post that morning from Ian Martin that Mir would be playing their first show in a very long time at a little studio in Tamachi, one stop over from my hotel and definitely not costing as much as a shinkansen ticket.
Yeah, I said _studio_. Studio Our House took me some time to find but I was surprised(maybe I shouldn't have been?) when I walked into a small opening that lead to the studio's entrance. The girl at the counter was extremely nice as I asked her about the nights itinerary, instead of that "yeah...this is my job" attitude I get from a lot of the staff from most live houses. I returned to the studio about half an hour later to watch Mir. 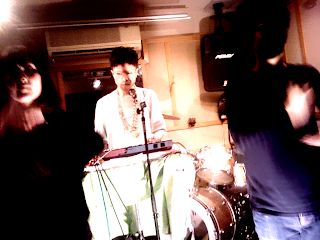 I met Mr. Ian Martin as Mir was setting up and the last band was clearing their stuff out of the studio. He told me that this was not just Mir's first show in a long time but it was 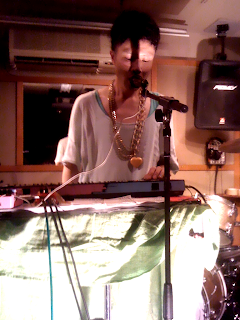 also going to be the debut of a new lineup. No more drums, no more guitar, just completely synth equipment. As we were talking, an older guy handed us some chips and his buddy of about the same age walked around with a wig that came from a cosplay store.

The studio was a little more than half the band and half the audience. About 10 or 15 bar stools littered the floor in front of the performing area and less than 10 people sat on them to see Mir that night. No one was more than a couple feet away from the band.
The three members now sported an electronic drum kit, keyboard and synthesizer instead of wielding guitars and a bulky drum set. Mir's set was unbelievably short for a 40-minute setlist. I recognized some of their old songs given the new treatment(fune to todai, etc.) and it doesn't seem like a lot was lost in transition. You would think that any band would take a drastic turn in performance when switching up their lineup like this, but Mir's new sound not only left everything I liked about the band intact, but the electronics added a whole new layer to their heartbreaking post-punk. Mir has this tendency to deliver what I think is the saddest, most heart-breaking music on the planet, and I never really figured out why they didn't get more attention than they should
. 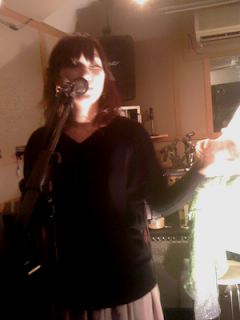 After chatting with Ian for a little bit my two friends had a good laugh about how odd the members of Mir looked while performing. It lasted until we got up to a restaurant to eat at, but honestly, nothing could have changed my mind about how I felt about seeing Mir that night. I never for one second felt bored during their set, neither did I have time to notice any of their weird mannerisms. It was all pure bliss to me, a devoted fan to this band that no one had heard of. But the experience that night - sitting on a bar stool in a small studio in the middle of nowhere, surrounded by good hearted people who were there to hear what I believe was _real_ music - that experience alone was worth way more than any other gig going on in that city at the time. 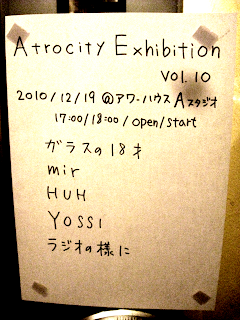